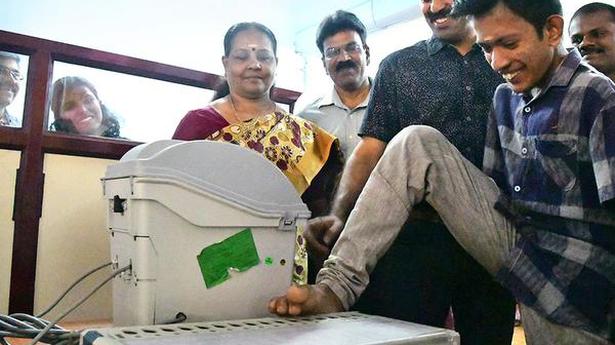 Differently abled Pranav M.B. will cast his maiden vote with the second toe of his right foot on April 23. And he is excited about it.

The excitement was palpable when he showed how to cast vote on an electronic voting machine in the presence of a bevy of VIPs at the Collectorate here on Wednesday. An undergraduate commerce student from Government College, Chittur, Pranav has a great message for people facing different kinds of physical challenges in life. “A vote is a fundamental right. It should not be wasted at any cost,” he beamed, rubbing shoulders with District Collector D. Balamurali and actor Govind Padmasoorya.

Pranav, who had contributed the money he raised through foot painting to the Chief Minister’s Distress Relief Fund during the worst floods that the State saw last year, has been chosen the youth icon representing the differently abled for the Systematic Voter Education and Electoral Participation (SVEEP) programme of the district.

Mr. Padmasoorya is the district youth icon in the general category. He too was upbeat participating in the SVEEP programme. The District Collector opened a centre at the District Information Office at the Civil Station where the public can try a hand at using an electronic voting machine (EVM) and a VVPAT (voter verifiable paper audit trail).

Election officials explained the working of each unit of the voting machine and their uniqueness.

The Election Commission (EC) on Thursday informed the Madurai Bench of the Madras High Court that the April 18 polling date could not be changed, and said it would conduct the elections in the State as scheduled, though the date coincided with the Chithirai festival. Consequently, a Division Bench of Justices N. Kirubakaran and S.S. […]

Amid the COVID-19 outbreak, the first phase of Census 2021 and updating of the National Population Register (NPR) that was to begin on April 1 has been “postponed until further orders,” the Ministry of Home Affairs (MHA) said in a statement on Wednesday. Also read | Interactive map of confirmed coronavirus cases in India “Due […]