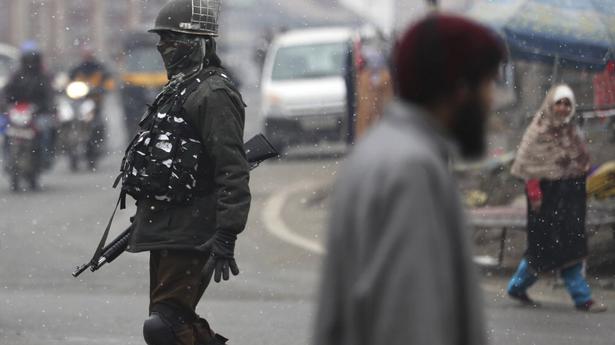 The police have registered a case against banned JKLF for allegedly attempting to incite violence and disturb law and order situation in Kashmir.

“Police has taken cognizance of the activities of banned organisation JKLF for their attempts to incite violence and disturb law and order situation in the Valley,” a police spokesman said.

He said the affiliates of the Jammu Kashmir Liberation Front (JKLF) in the Valley have circulated statements calling for violence in the forthcoming days and are propagating the messages and activities of an unlawful organisation.

“Such activities deteriorate the law and order situation and lead to violence. Accordingly, police have registered a case under relevant sections at Kothibagh Police Station,” he added.

The spokesman said further investigation into the matter is on.

The JKLF had called for a strike on February 9 and February 11 to mark the death anniversaries of Parliament attack convict Afzal Guru and JKLF founder Muhammad Maqbool Bhat, respectively.

Deadline to upload documents for Teachers Recruitment Board ends

The Teachers Recruitment Board (TRB) will not extend the deadline to upload documents or apply online for vacancies it had advertised. The TRB allowed candidates to apply till 5 p.m. on Friday. However, following appeals from several candidates who were unable to upload documents such as acquaintance and attendance particulars with the countersignature of the […]

Union minister Harsh Vardhan has discredited the recent global reports claiming over one million deaths in India due to air pollution, saying such studies are only aimed at “causing panic”. The Minister of Environment, Forest and Climate Change is contesting the Lok Sabha polls from Chandni Chowk constituency in the national capital. In an interview […]