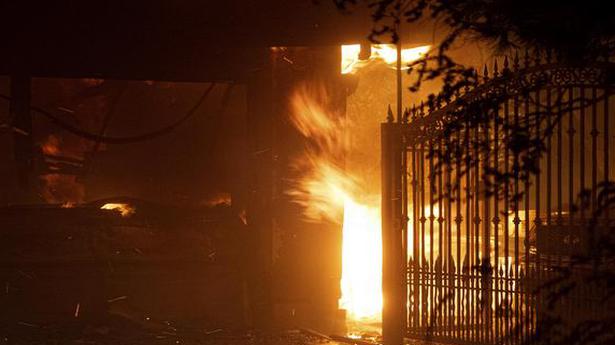 A massive fire broke out in a four-floor hotel in Madhya Pradesh’s Indore city on Monday, police said.

No casualty has been reported so far.

The blaze erupted in ‘Golden Gate’ hotel, located in Vijay Nagar area, and the flames spread rapidly across its four floors, a police official said, adding that thick smoke engulfed the entire premises.

As soon as the fire was reported, those present in the hotel were evacuated and simultaneously, people in the adjoining residential buildings were also alerted, he said.

According to eyewitnesses, Fire Brigade employees made hectic efforts to douse the flames which spread to inner areas of the hotel.

“There is no information of any casualty so far,” he said, adding that the cause of the fire was not yet known.

Efforts were underway to douse the blaze, he added.

India is among 11 countries that has over a 1,00,000 cases Source: thehindu.com Related

Over 220 people have died and 6,600 have tested positive for COVID-19 in India. Assam recorded its first death on Friday when a 65-year-old man died in Silchar hospital. The situation in the United States continues to be grim with over 16,000 dead and 4.6 lakhs infected. Globally, over 15 lakh people have been infected […]

Terming as “disturbing” reports of police allegedly entering hospitals in violence-hit areas during agitations against the Citizenship (Amendment) Act, the Indian Medical Association (IMA) said such actions are “unacceptable” and demanded that hospitals be declared “safe zones”. The doctors’ body said hospitals are sacrosanct and are exempted from violence even in a war zone. “What […]