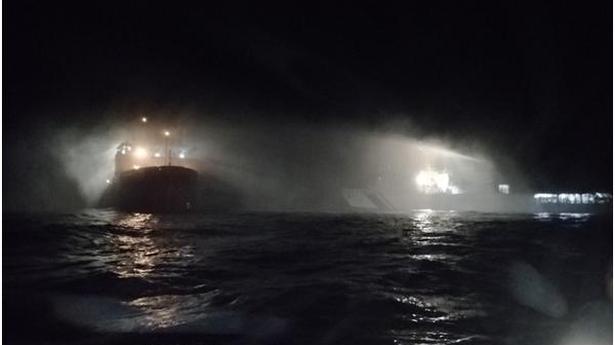 A fire was noticed in the accommodation area of an ocean research vessel, Sagar Sampada, with 46 crew members on board, on March 15 night. The vessel was 35 nautical miles off Mangaluru.

According to S.S. Dasila, Karnataka Commander of the Indian Coast Guard, none were injured in the fire.

Two Indian Coast Guard vessels were alerted at about 10 p.m. and they helped control the fire, along with other merchant vessels. The fire was extinguished at about 1.30 a.m. on March 16.

The research vessel is now heading towards Mangaluru for additional shore assistance if required, according to Mr Dasila.

The Commander said that 16 scientists were among the crew members on board the ship.

The Coast Guard received the distress message from the ship about the fire in eight compartments and diverted its two ships, ICGS Vikram and ICGS Sujay, for assistance.

“Merchant vessels in the area also responded and were diverted to provide assistance,” he said adding that the ship is expected to arrive in Mangaluru after 3 p.m. on March 16.

As many as twelve Opposition political parties staged a demonstration on Friday protesting against the alleged failure of the Naveen Patnaik governmen Source: thehindu.com Related