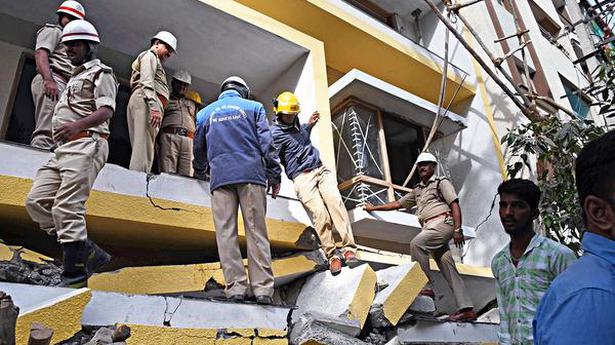 Five people, including a three-year-old girl, were killed and four others were injured when an under-construction building in the core city area collapsed causing the basement and first floor of an adjoining residential building to give way. That building started tilting onto a third adjacent apartment. The incident took place around 1.55 a.m. on Wednesday in the quiet neighbourhood on 2nd Cross, near Hutchins Road at St. Thomas Town, in Pulakeshinagar. More than 35 people from eight households escaped unharmed, and have been asked to look for alternative accommodation.

Residents in the area awoke in panic to a loud bang and tremors. They initially thought it was an earthquake. They rushed out of their flats to see three buildings damaged: the under-construction building first fell to the street level, which disturbed the foundation and pillars of the next building — the four-storeyed Sai Adi Ambal, causing it to give way and crash into its basement. Narayan, 26, who worked as watchman there, his wife Nirmala, 20, and their three-year-old daughter Anushka, who lived in the basement of Sai Adi Ambal were killed. This building began to tilt towards an adjacent apartment even as residents watched in horror. Almost all the buildings on the road have been constructed with barely any space between them.

According to the police, six labourers from Bihar and West Bengal were sleeping in the under-construction building. While two labourers Kahgen Sarkar, 39, and Shambu Kumar, 38, died, Fire and Emergency Services personnel rescued the other four. Civic officials said that work on the building had started six months ago.

The Pulakeshinagar police have taken up a case against the site owners, Mohammed Shoiab, Mohammed Imtiyaz, and Pratap Rudrani, along with the builder Syed, civil engineer, and the concerned BBMP officials, and have charged them under Section 304 (culpable homicide). No arrests have been made.

The BBMP has written to the city police requesting action against Mr. Shoiab, Mr. Imtiyaz, one of the site owners Hamid, Mr. Sayed, and also the architect, B.M. Sridhar, for negligence, poor construction, and violation of rules.

The Fire and Emergency services and the police were the first to arrive at the spot and began rescue operations. They were later joined by the National Disaster Response Force (NDRF), State Disaster Response Force (SDRF), Quick Response Team (QRT) of the Civil Defence, and Search and Rescue (SAR) teams. In all, a total of 100 personnel were involved in the search and rescue operation, which ended at around 5.30 p.m.

COVID-19 was an opportunity for G-20 leaders to work together, but they disappointed: Nicholas Burns

In a conversation with Congress leader Rahul Gandhi, former U.S. diplomat Nicholas Burns blamed the world leaders, including Donald Trump, for not setting aside their differences and work on a vaccine for coronavirus. Source: thehindu.com Related

Wildlife Society of Orissa, an environmental pressure group, demanded that all seized and rescued pangolins kept in Nandankanan Zoological Park (NZP) be released into the wild. “The Indian Pangolin is an endangered species whose wild population has fallen in the last one decade due to relentless poaching and trade. In 2009, the NZP started a […]

The “trip of a lifetime” to a safari park in Kenya turned into a nightmare for six members of a family from India in Canada who perished when the Nairobi-bound Ethiopian Airlines plane crashed minutes after take-off from Addis Ababa. The Boeing 737 took-off from Bole International Airport on Sunday and lost contact six minutes […]