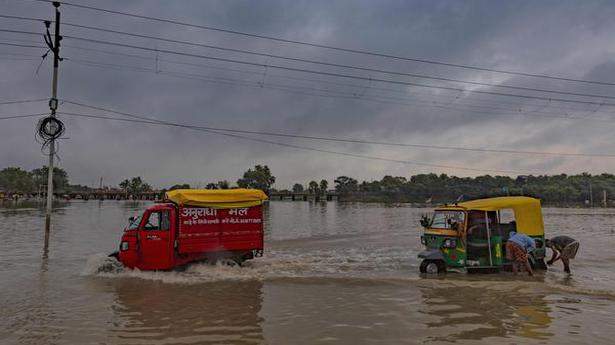 Flood waters have entered the barracks of the district jail located near the River Ganga here, prompting authorities to shift around 900 prisoners to other jails, a senior official said on Monday.

Four Deputy Superintendents of Police, 20 SHOs, 80 sub inspectors, 146 head constables and 380 constables have been deployed to ensure safe shifting of the inmates.

The decision to shift the inmates to other jails has been taken to ensure their safety and health, District Magistrate Bhawani Singh Khangaraut said.

There is heavy water logging in jail premises as of now, the DM said, adding low-lying areas have been specially affected.

Of the 900 prisoners, 500 are being shifted to Azamgarh Jail and remaining to Ambedkarnagar, Additional District Magistrate, Ballia, Ram Asrey said. He said the jail is near the River Ganga which has been in spate and it is not possible to pump out water as large areas have water.

Another senior official said all barracks are submerged in about three feet water.

“All the barracks have almost three feet water while the place where the inmates sleep has about one feet water. The sewer and drains are also overflowing,” ASP Sanjay Yadav said.

There are a total of 863 inmates in the district jail of which 500, including 44 women, are being shifted to Azamgarh jail and others to Ambedkarnagar jail, Mr. Yadav added.

Rains have severely hit life in Baria tehsil area where an ashram in Keharpur village has been submerged while a population of one lakh in about 15 villages is totally affected, SDM Dushyant Kumar Maurya said.

A release from the North-Eastern Railway said traffic on the Ballia-Chappra route has been hit after tracks were damaged and repair work was on in full swing.

PRO, Mahesh Gupta, said rail tracks were damaged early on Sunday morning and the repair work is going on in full swing.

About 20 trains on the Ballia-Chappra route have been cancelled while the route of 20 others has been changed, the PRO added.

Gone are the days when regular camera-and-bottle wielding tourists flocked the typically ‘popular destinations’ on offer in the God’s Own Country. The visitors landing here nowadays look to stay in its villages, know the local culture, visit lesser-known spots, and explore other areas of interest. Taking into consideration this ever-growing interest in experiencing the unblemished […]

From swanky IT parks to slums and from commercial areas to premium residential hubs, Bengaluru Central Lok Sabha constituency presents a picture of contrasts. This segment is a Bharatiya Janata Party (BJP) stronghold despite having more Assembly segments won by the Congress. It was carved out of Bengaluru North and Bengaluru South Lok Sabha constituencies […]