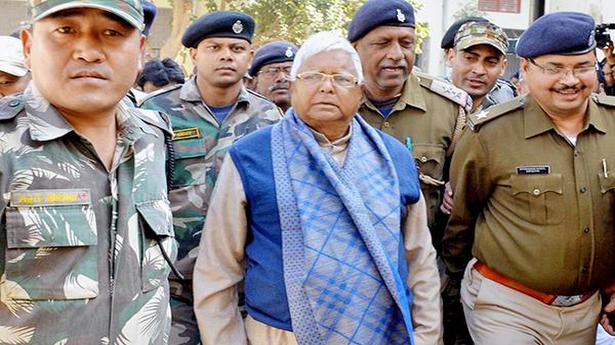 “Why? This is most unfortunate,” Mr. Sibal expressed his chagrin.

“Why? Because you are a convicted man!” Chief Justice Gogoi retorted at Mr. Sibal.

The CJI said Yadav has been convicted in four different corruption cases. The Bench asked why Yadav should not approach the High Court concerned.

The order comes a day after the CBI said Yadav does not deserve bail as he has managed to avoid jail time and is already living out of a special paying ward equipped with all facilities, the Central Bureau of Investigation (CBI) told the Supreme Court on April 9.

The 39-page counter to Yadav’s plea for bail reproduces a list of high-profile persons, ranging from Congress politician Ahmed Patel to Yadav’s sons to senior advocate Ram Jethmalani, who visited him in his ward for the past one year. The CBI said Yadav has been conducting his “political activities” from his ward.

If he was so unwell that he could not spend even a day in jail, how has he now become, all of a sudden, hale and hearty to seek bail in order to “guide” his political party through the forthcoming Lok Sabha elections, the agency asked the apex court.

“Suddenly when the Parliamentary elections are near, the petitioner (Yadav) clearly took a somersault and sought bail…” the CBI opposed the bail plea.

The fact that he has sought bail both on medical grounds and to carry out “essential responsibilities as a party president” in the Lok Sabha election are “mutually contradictory”.

The agency reminded the court that Yadav has been found guilty in four of the six fodder scam cases in which he has been named accused. Two of the remaining cases are still under trial.

CBI said Yadav is facing bail in a case in which he has been sentenced to 14 years in prison. He has not spent even 15% of the time in jail. In fact, the chargesheet against Yadav in this case was filed in the year 2000. It had taken 18 years for the trial to conclude.

Grant of bail in economic fraud cases is an exceptional remedy, the agency pointed out. Yadav was Bihar’s Chief Minister and custodian of the public administration when he committed the crime. “The present case involves a deep-rooted conspiracy and involved huge loss and defection and misappropriation of public funds affecting the economy of the country,” the agency submitted.

It said the fodder scam involves the fraudulent withdrawal of public money to the tune of ₹950 crore in the early 1990s. Of a total 64 fodder scam cases investigated by the CBI, chargesheets could be filed in 60 cases. The remaining four cases were closed.

Of these 60 cases, 53 were tried at Ranchi. Fifty-one of these cases have ended in conviction.

West Bengal Chief Minister Mamata Banerjee on Saturday expressed shock at the Union Government’s decision to sell its stake in the Life Insurance Corporation ( LIC) and wondered whether the decision portended the “end of an era.” “I am shocked & appalled to see how the Central Government plans to ambush the heritage & legacy […]

Pick your daily bread, just leave cash in the box

With physical distancing being underscored repeatedly to avoid the spread of coronavirus (COVID-19), a sweet shop owner at Rathinapuri in Coimbatore city, has set up a temporary stall outside his closed shop, stocked with loaves of bread but with no shop attendant. The customers can simply pick up a loaf and leave ₹30 in a […]