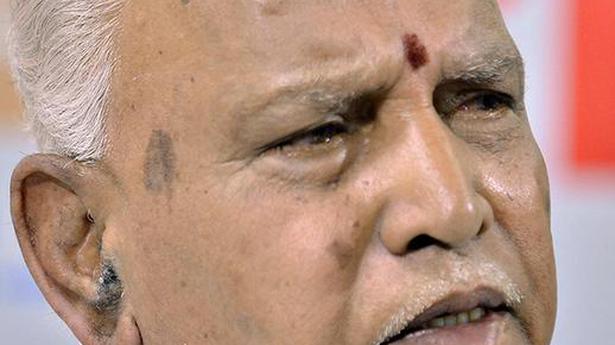 State BJP president B.S. Yeddyurappa startled the party rank and file on Sunday by saying that efforts were on to divide the Veerashaiva Samaja by sowing seeds of discontent on caste lines.

Addressing party workers and leaders in the city, he urged them and members of the community to ignore such attempts. “I want to make it clear that a defeat of Pratap Simha in Mysuru will be akin to my defeat. My future career will be shaped or strengthened by his victory,” he said.

That the issue was serious became evident when Mr. Yeddyurappa said he had come specifically to address this issue and revealed that similar attempts were being made in Nanjangud, which is part of Chamarajanagar parliamentary constituency, where V. Srinivas Prasad is the BJP candidate.

“I want to make it clear that he [Mr. Prasad] was not interested in contesting the elections… I forced him to do so because of the political situation. Hence, do not succumb to efforts being made to sow the seeds of casteism and divide the community,” the former Chief Minister said.

Bharatiya Janata Party State president B.S. Yeddyurappa on Friday predicted that stalwarts from the governing coalition, including the former Prime Minister H.D. Deve Gowda and Leader of the Congress in the Lok Sabha M. Mallikarjun Kharge would be defeated in the Lok Sabha polls. Addressing party office-bearers and leaders in Bengaluru, Mr. Yeddyurappa maintained that […]

Jammu varsity, airport to be renamed after Dogra monarchs

CPI State secretary K. Ramakrishna has demanded that the YSRCP government take immediate steps to put an end to the “spate of farmer suicides” across the State. Commencing a State-wide yatra from Martur in Prakasam district to instil confidence among the members of bereaved farmer families, Mr. Ramakrishna said there had been no let-up in […]