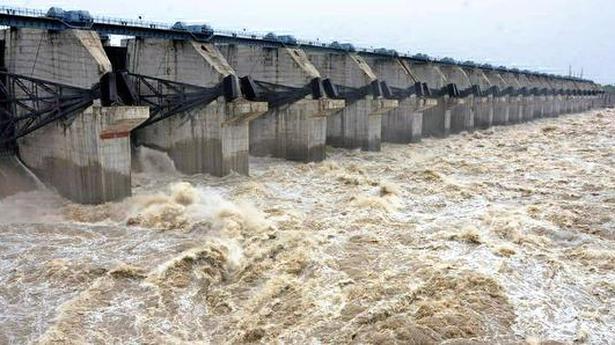 The highest flood level discharge ever recorded at Prakasam Barrage was on October 5, 2009, when 10.94 lakh cusecs overflowed the mud bank on either side of the river, marooning villages downstream, breaching Oleru drain and flooding Repalle town.

The gushing waters entered the rooms of the AP Tourism resort and Punnami Berm Park at Bhavanipuram. The depth over the crest level of Prakasam Barrage was also the highest ever at 23.73 feet.

The maximum flood discharges observed during the last hundred years show that the only time they ever crossed the 10-lakh cusec-mark, was again on October 7, 1903. It was yet again in October 1964 that 9.87 lakh cusecs of flood discharge wreaked havoc downstream the barrage.

Since then, flood banks totalling a length of 364 km on either side of the river have been strengthened.

After 1964, the flood discharges never crossed 9 lakh cusecs, until the massive flood on October 5, 2009.

Since 2000, floods have been intermittent and it was only four times during the last 20 years, that the maximum flood discharges crossed 5 lakh cusecs, indicating the effects of climate change.

After the massive flood in October 2009, the flood discharges at the barrage have not crossed the 5-lakh cusec-mark, and during the last five years, the maximum flood discharge was witnessed in September 2016, when 1.39 lakh cusecs flowed over the barrage.

Govt. may not give nod to prosecute CPI(M) workers

The State government may not give clearance for prosecuting the two Communist Party of India (Marxist) [CPI(M)] activists, Alan Suhaib and Thaha Fazal, arrested under the provisions of the Unlawful Activities (Prevention) Act from Kozhikode on Saturday. The arrest has drawn flak from various quarters, mainly from the CPI(M) leaders, including Left Democratic Front (LDF) […]

Punjab Chief Minister Amarinder Singh on Sunday said that the nation’s unity was inviolable, notwithstanding the discordant voices being raised in the current scenario. Pointing out that the resolution passed by the Punjab Assembly (on Citizenship Amendment Act) was there for all to see, the Chief Minister made it clear that the State would not […]