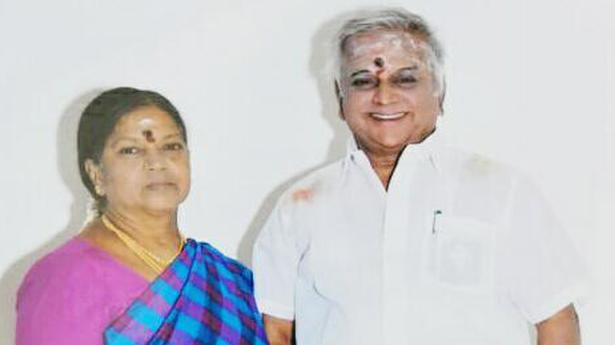 Former Tirupattur MLA T.K.C. Sundaravelu, 67, his wife Vijayalakshmi, 60, and their car driver Veeramani were killed on the spot when the car in which they were travelling collided with a multi-axle vehicle on Saturday morning.

The accident took place near Minnur at 6 a.m.

Sundaravelu was on his way to Chennai for medical treatment when the car collided with the multi-axle vehicle loaded with iron pipes from behind.

In the impact, the car was flattened. It took almost one-and-a-half hours for the police and fire service personnel to retrieve the bodies from the mangled remains of the car, the police said. Sundaravel represented Tirupattur constituency in Vellore district during 1991-96.

He won the elections on AIADMK ticket. In 2001, he contested for Tirupattur municipal chairman post and won.

After former Chief Minister Jayalalithaa’s death, he joined Amma Makkal Munnetra Kazhagam and served as its town secretary. He was not well for the past few days and as per doctor’s advice he was referred to a hospital in Chennai.

Taking a serious view of the restrictions imposed under Sec.30 of the Police Act and Sec.144 of Criminal Procedure Code in the capital villages, the High Court directed the Advocate General (AG) of Andhra Pradesh (A.P.) to file an affidavit by January 17 explaining the circumstances that led to the crackdown on farmers and women […]

Facing brickbats for its ₹4.2 crore lawsuit against four Gujarati potato farmers, food and beverages giant PepsiCo has offered to settle the case if the farmers stop growing the registered potato variety used in its Lays chips. In an Ahmedabad civil court on Friday, PepsiCo’s lawyer offered a settlement on these terms: the farmers must […]

Fourteen more people have tested positive for COVID-19 — eight in Kerala and three each in Karnataka and Maharashtra, State authorities said on March 10, as the total cases in the country went up to 61. Meanwhile, the Health Ministry has said that it has, for the first time, used a combination of two drugs […]