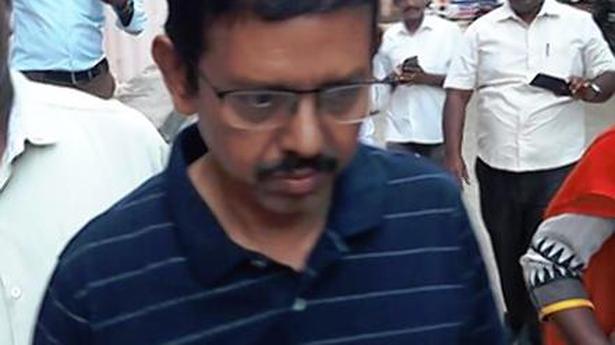 The Idol Wing of the Crime Branch CID on Friday arrested M. Veera Shanmuga Moni, a retired IAS officer and former commissioner of the Hindu Religious and Charitable Endowments Department, for his alleged role in replacing antique idols of the Ekambareswarar temple in Kancheepuram and his failure to ascertain whether new idols made from public donations contained the specified quantity of gold and other metals.

The 64-year-old was arrested by officers of the Idol Wing from his residence in Chennai. He was produced before the Additional Chief Judicial Magistrate in Kumbakonam, who remanded him till March 29. He is lodged in the Central Prison, Tiruchi.

Mr. Manickavel told The Hindu, “Veera Shanmuga Moni, when he was HR&CE commissioner, issued orders on the recommendations of then Additional Commissioner and then Chief Sthapathi, granting permission to temple authorities to collect gold and cash from the public for making new idols of Somaskandar and Ezhavarkuzhaliamman. Though he ordered that there should be 5% gold among other metals in the newly cast idols, our investigation with the help of experts from IIT revealed that there is no gold in the two idols which were made recently to replace the old ones. The former commissioner failed to ascertain the weight of the idols and the quantity of gold. He did not receive any completion certificate from subordinates. All records relating to receipt of donations were destroyed,” Mr. Manickavel said.

He added that in 2015 the former commisisoner, the then additional commissioner, the then chief sthapathi and other staff of the temple joined hands to forcibly obtain a report from the hereditary sthanigars (temple priests) certifying that the Chola-era bronze idols of Somaskandar and Ezhavarkuzhaliamman were damaged due to wear and tear and unfit for worship.

HR&CE officials ordered new idols with public donations, Mr. Manickavel claimed. The weight of the new idols was 174 kg. As per specifications, the idols should have contained 8.77 kg of gold but the IIT team found that they did not have an ounce of gold in them.

The BJP is an expert at murdering democracy, but Indians are wiser

Appointed general secretary in-charge of Uttar Pradesh (West), former Union minister Jyotiraditya Scindia has been tasked with the responsibility of not just delivering seats for the Congress but also-as party president Rahul Gandhi has said-ensuring the BJP does not gain from Congress candidates pitted against the BSP-SP contestants. Now campaigning extensively in his constituency, Guna, […]

Jitan Ram Manjhi’s Hindustani Awam Morcha, created in 2015, may not have contested a single Lok Sabha poll, but the Bihar ex-chief minister is still pulling his weight in the run-up to the LS poll. He first spoke of one seat more than Upen­dra Kushwaha’s Rashtriya Lok Samta Party; now the Dalit leader says he […]

Punjab reported 188 fresh COVID-19 cases on Friday and two more deaths, taking the total number of cases to 4,957 and the toll to 122, an official sta Source: thehindu.com Related