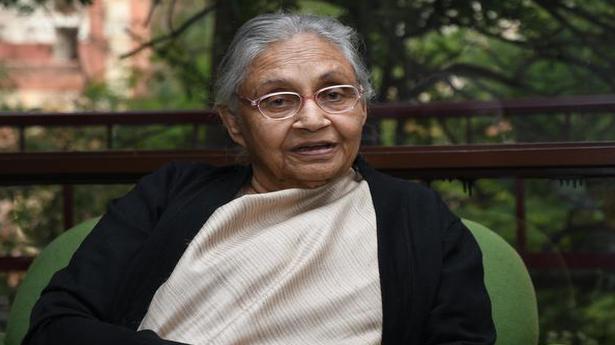 Former Chief Minister of Delhi Sheila Dikshit passed away at a private hospital in the Capital on Saturday. Ms. Dikshit was 81.

She was admitted to Fortis Escorts Hospital this morning and passed away at 3:55 p.m., according to hospital sources.

“Ms. Dikshit was brought in the morning on 20th July 2019 to Fortis Escorts Heart Institute, Okhla, New Delhi, in a critical condition with cardiac arrest. A multi-disciplinary team of doctors, led by Dr. Ashok Seth, Chairman, Fortis Escorts Heart Institute, carried out the advanced resuscitative measures. Her condition stabilised temporarily. However, she had another cardiac arrest and despite all the resuscitative efforts, passed away at 3:55pm on 20th of July 2019,” a statement from the hospital said.

She had been appointed as the Delhi Pradesh Congress Committee president on January 10, 2019, days after Ajay Maken resigned from the post citing ill health. A three-time CM, the Congress veteran was the candidate from the North-East Delhi seat in the Lok Sabha Elections 2019. She lost to BJP candidate Manoj Tiwari.

Russia has called upon both India and Pakistan to save the situation in Kashmir from spiralling out of control and carry out the changes in the region within the constitutional parameters of India. “We hope that the parties involved will not allow a new aggravation of the situation in the region as a result of […]

Initiative to rekindle interest in reading

Tucked away deep inside the woods, Government Vocational Higher Secondary School, Achencoil, is used to face challenges. There are very few options for transport and hardly any access to sophisticated methods of recreation — a destiny shared by both the students and villagers. And now, to provide the nearby homemakers a break from their monotony, […]

Coastal Karnataka reported its first COVID-19 death on Sunday. A 50-year-old woman from Bantwal in Dakshina Kannada district who was down with Severe Acute Respiratory Illness (SARI) died at the Government Wenlock Hospital here. After being diagnosed of SARI, the woman was admitted to the Wenlock Hospital on April 18. She was being treated in […]