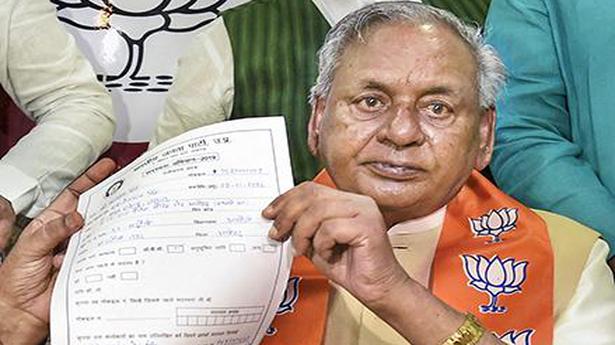 The court holding the trial of various BJP leaders, including L.K. Advani, Murli Manhor Joshi and Uma Bharti for allegedly conspiring to demolish the mosque at the disputed Ram Janmbhoomi-Babri Masjid site in Ayodhya, had issued summons to Kalyan Singh after it was informed that his term as Rajasthan governor expired in the first week of this month.

Mr. Singh was the Chief Minister of Uttar Pradesh when the 16th-century structure was razed on December 6 in 1992.

After completion of his term as Rajasthan governor, which accorded him immunity from prosecution in any criminal case during his tenure as a constitutional dignitary, Kalyan Singh had joined the BJP this month.

Three persons were killed when two trains of the National Thermal Power Corporation (NTPC) collided in Singrauli district of Madhya Pradesh on Sunday morning. “The persons were operating one of the trains carrying coal from NCL mines to an NTPC plant in Rihand Nagar of Uttar Pradesh, when another train coming from the opposite direction […]

The State has rolled out a parenting campaign ‘Namukku valaram, nannayi valartham’ to redefine parenting in modern times. An initiative of the Women and Child Development Department, the campaign urges parents, teachers, and society to ‘grow up’ for healthy upbringing of children. Chief Minister Pinarayi Vijayan, in a Facebook post on Friday, said problems in […]

The Communist Party of India (Marxist-Leninist) has filed a police complaint against the Border Security Force (BSF) alleging that the Central force has “stripped and assaulted a 25-year-old woman in Nadia district.” The incident took place at Hatkhola village under the Chapra police station, CPI(ML) Nadia district secretary Subimal Sengupta said. “Taking advantage of coronavirus-driven […]