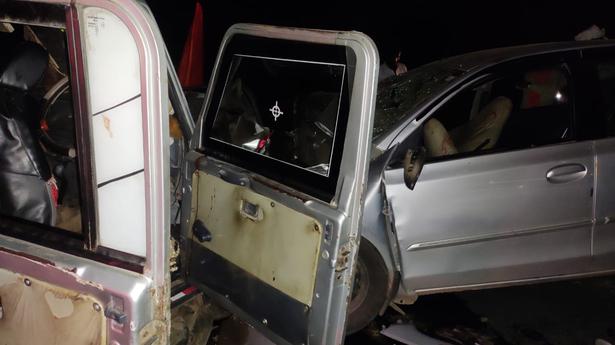 Four persons of Arsikere taluk of Karnataka’s Hassan district were killed on the spot near Kalkere in Hosadurga taluk of Chitradurga district after two cars collided early on Sunday.

According to the police, the deceased have been identified as Gautam Singh, Madan Singh, Mukesh Singh and car driver Lokesh of Arsikere taluk of Hassan district.

The four youth had gone to participate in the ‘Mahaganapathi shobha yatra’ in Chitradurga on Saturday. They had left Chitradurga and were going to Hosadurga when their four-wheeler collided with another car.

Superintendent of Police K. Arun told The Hindu “it was an head-on collision between the two vehicles”.

Rebuffing the Opposition’s criticisms that the ruling NDA was using the national security issue for electoral gains, Prime Minister Narendra Modi on Thursday said rooting out terror was essential so that the money could be used to improve the living conditions of the poor. Addressing a rally in this north Bihar town, Mr. Modi also […]

A go-karting race was the main attraction of the STEPCONE-2020 Tech Fest at GMR Institute of Technology, which drew hundreds of students from several States. Building a go-kart is considered the first step towards learning car designing and automobile engineering. Nine teams from different colleges showcased their talent in a series of rounds conducted to […]