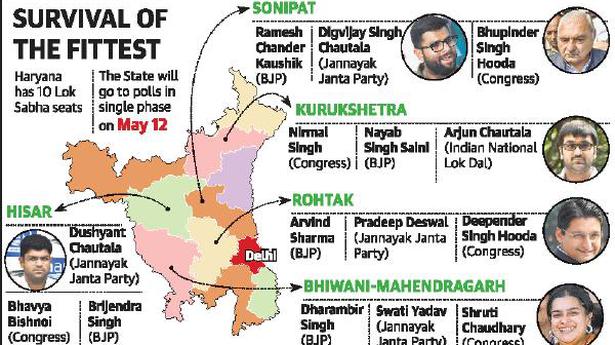 Having ruled the State for the most part of over five decades since it was carved out of Punjab on November 1, 1966, the four prominent political families — the Devi Lal clan, the Bansi Lal clan and the Bhajan Lal and the Hooda families — are caught in a high-stakes electoral battle in half of the 10 parliamentary constituencies in Haryana.

In two of the Lok Sabha constituencies — Sonipat and Hisar — the families are pitted against each other in the most keenly fought multi-cornered electoral contests in the State.

For Jannayak Janta Party (JJP) leaders Dushyant Chautala and his brother Digvijay Singh Chautala — both contesting their first Lok Sabha election after floating their own party following the split in Indian National Lok Dal (INLD) in December last year — the results would pave the way for the crucial Vidhan Sabha election due later this year.

Claiming to be the power to reckon with in the State, after having finished second to the BJP in the Jind bypoll in January this year, the Lok Sabha election could be the litmus test for the popularity of their party among the electorate, especially the youth.

“Though unfavourable outcome for the two and their alliance with the AAP may not be the end of road for them with strong political presence in the State, it could be a big setback for their future plans,” said Ram Kanwar, a political analyst.

Similarly, three-time MP Deepender Singh Hooda — the only Congress candidate to win in Haryana in 2014 Lok Sabha election despite the Modi wave — need to hold on to his seat in what could be called a “battle of prestige” for him.

Having lost the Rohtak Vidhan Sabha seat in 2014 and the recent election for the city’s Mayor, the loss of Rohtak parliamentary constituency, the home turf of the Hoodas, could deal a big blow to the political future of the family.

Similarly, Bhupinder Singh Hooda, caught in a battle of nerves with BJP’s Ramesh Chander Kaushik and Digvijay Singh Chautala, faces a must-win situation to prove his popularity among the Jats and keep his hopes alive to be the Chief Minister of Haryana for the third time.

The fight between the Chautalas and the Hooda family in Haryana is to establish themselves as Jat leaders and the loser would have to pay a huge political price.

The outcome of Kurukshetra Lok Sabha election would decide the future political course for Arjun Chautala.

“Having thin political presence in the State, the stakes are relatively higher for Bansi Lal and Bhajan Lal families though. The two families seem to be fighting the battle of survival of sorts in these elections. Shruti Chaudhary and Bhajan Lal’s son Kuldeep have already lost their previous Lok Sabha elections. Any unfavourable results this time around could gradually push the two families into political oblivion,” said Mr. Kanwar.

Former Prime Minister Manmohan Singh on Thursday appealed the Narendra Modi government to see to it that 16 lakh customers of the scam-hit Punjab & Maharashtra Cooperative Bank get some relief. Exception should be made to the restriction on withdrawals in the case of depositors who have pressing medical needs such as kidney transplant, he […]

Deputy Commissioner and District Returning Officer M. Deepa has issued notices to three candidates contesting elections from the Dharwad parliamentary constituency for failing to publish their criminal antecedents in the print and electronic media. Ms. Deepa told presspersons here on Sunday that the Election Commission has made it compulsory for candidates contesting the polls to […]