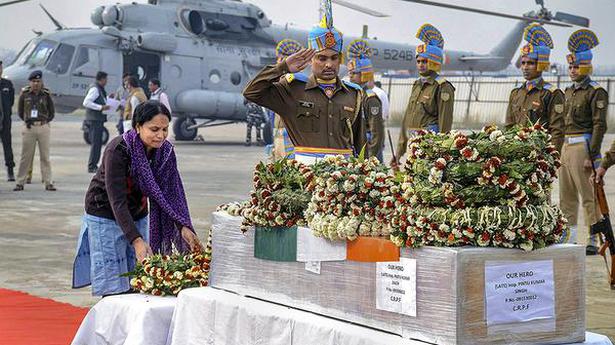 The Bihar government has come in for sharp criticism as none of its Ministers were present at the Patna airport on Sunday to receive the body of Central Reserve Police Force Inspector Pintu Singh who was killed in a gun battle in Kashmir. The Chief Minister, his Cabinet colleagues and other NDA leaders were allegedly busy with the Sankalp rally that was addressed by Prime Minister Narendra Modi.

Inspector Pintu Singh, 35, was killed in an encounter in Handwara area of Jammu and Kashmir on March 1. His body was brought to the Patna airport en route to his home in Bagras-Dhyanchakki village in Begusarai district.

While the Ministers and leaders of the ruling BJP-JD(U) were conspicuous by their absence, State Congress president Madan Mohan Jha and Lok Janshakti Party leader Choudhary Mahboob Ali Kaiser were present at the airport to pay tributes to the slain soldier.

Barely three hours later, Chief Minister Nitish Kumar, along with his Cabinet Ministers, reached the airport to receive the Prime Minister who had come to address the rally.

State BJP leader and Minister of Labour Resources Vijay Sinha reached the soldier’s home in Begusarai late on Sunday night, hours after the funeral was over. Angry family members of the jawan said the absence of State Ministers at the funeral was an “insult to the martyr”.

In a video which has gone viral on social media, the Minister is seen telling the grieving family that there was a “communication gap and misunderstanding about the timing of the funeral”. He also said that because of the crowd at the Sankalp rally, he could not reach on time for the last rites.

The jawan’s grieving father, Chakradhar Singh, later told journalists that the NDA leaders chose to neglect his son to attend the Patna rally.

“It shows how concerned they are about the soldiers. NDA leaders were more concerned about the Sankalp rally of (Prime Minister) Narendra Modi. They have neglected to pay homage to a brave soldier who died for the country,” Chakradhar Singh said.

His brother Sanjay Kumar Singh said, “Pintu has not received the honour he deserved from the State government. No NDA leader came to the airport… it hurts.”

Later, JD(U) national vice-president and election strategist Prashant Kishor tweeted to apologise on behalf of his party. “We are sorry for the error of judgment on part of those of us who should have been there with you in this hour of grief,” tweeted Mr. Kishor.

Leader of the Opposition in the State Assembly Tejashwi Yadav slammed the ruling alliance’s disrespect to the slain soldier.

Self-medication is not new to India. A 2015 survey conducted by Lybrate among 20,000 people across 10 cities showed that 52% of people practised self-medication. But the country lacks a well-defined regulation for over the counter (OTC) medicines, important for patient safety. The government is in the process of finalising an OTC drug policy, which […]

‘India needs to guard against threats to internal security’

While strengthening its global positioning on political, economic and technology fronts, India needs to guard against internal security threats, former National Security Advisor M.K. Narayanan said on Tuesday. The country faces a challenging situation of dealing with internal security threats in the form of insurgency in north-eastern States, separatist movement in Kashmir, and the Khalistan […]

Director General of Police Jacob Thomas on Tuesday faced a bureaucratic hurdle that could stymie his bid to contest the Lok Sabha election from the Chalakudy constituency in Kerala. Mr. Thomas told The Hindu that the State government had doubted whether his application for voluntary retirement he had mailed to the General Administration Department (GAD) […]