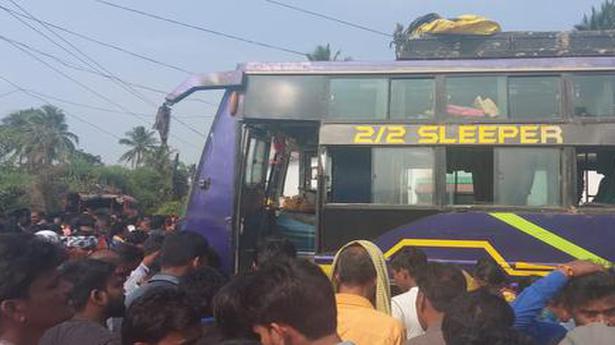 Odisha government on Monday suspended four engineers of two departments for the Ganjam bus tragedy in which 10 people were electrocuted and burnt to death, State Energy Minister D.S. Mishra said.

The four engineers – two of them from the Energy Department and another two from the Rural Development Department were charged with dereliction of duty, he said.

The incident took place on Sunday afternoon when a bus with about 40 passengers on board came in contact with 11kv live wire in Golanthara in Ganjam district.

He said the bus was about 12ft high including the luggage carrier atop it. It hit the live wire which was about 11ft from the ground.

The height of 11kv wires should be at least 20ft above the ground. The circle executive engineers will identify the vulnerable spots where wires are hanging below the required level, the Minister said and directed officials to ensure that all hanging wires be raised to the standard height.

A special workshop will also be organised to ensure that safety measures are followed by all departments concerned, Mr. Mishra said.

Meanwhile, a blame game has started between the departments as authorities of Southco, the power distribution company in Ganjam district, in a report held the Rural Development Department responsible.

It said the Rural Development Department had converted the rural road to a concrete road almost raising its height by 3-4ft and reducing ground clearance of the road in 2018.

Commerce and Transport Minister Padmanabha Behera has blamed the Electricity Department and the bus driver for the mishap. He said a detailed probe is being initiated to ascertain whether the bus had route permit to ply on the rural road.

Meanwhile, the Opposition BJP demanded resignation of the Energy Minister while Odisha Pradesh Congress Committee held the State government responsible for the death of 10 people due to others’ fault.

OPCC president Niranjan Patnaik said that there is no point in one department blaming the other. The government as a whole should be held responsible for the death of 10 innocent people.

The SCB Medical College and Hospital in Cuttack on Thursday achieved a major milestone by performing its 75th bone marrow transplant – the highest in any State government-run hospital in the country. The Bone Marrow Transplant (BMT) Unit of the hospital extends the treatment free of cost – a pioneering effort in the country. Of […]

Thalassery Archbishop Mar George Njaralakatt on Monday warned that farmers would organise themselves and under no circumstances would they allow the property of any farmer to be attached by banks. He was addressing farmers who came from Kannur and Kasaragod districts to voice their grievances against neglect by the Central and State governments at an […]