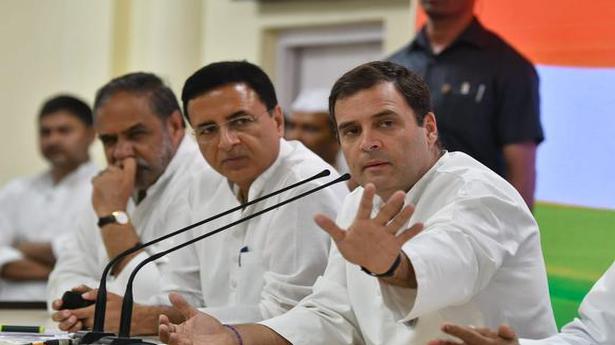 BJP president Amit Shah on Saturday cited a media report to attack Congress chief Rahul Gandhi over a defence deal under the UPA government in which an alleged business partner of Gandhi had got an offset contract.

According to Business Today magazine, a co-promoter of a UK-based firm in which Mr. Gandhi owned a majority stake received defence contract as an offset partner of a French company when the Congress-led UPA was in power.

“With Rahul Gandhi’s midas touch, no deal is too much! When he has a say, his business partners make hay. Doesn’t matter if India suffers on the way! #StealLikeRaga,” Mr. Shah tweeted, tagging the report. – PTI

Rahul Gandhi accuses govt of compromising in dealing with terrorism

Congress president Rahul Gandhi accused the BJP-led government on May 4, 2019 of compromising in dealing with the challenge of terrorism and cited the release Jaish-e-Mohammed chief Masood Azhar during the NDA rule.

Addressing a press conference at the Congress headquarters here, he said, if voted to power, his party will adopt a more stern approach in combating terrorism than what the Narendra Modi government’s approach has been.

“Masood Azhar is a terrorist, he must be punished. But who sent him to Pakistan?” the Congress chief asked, adding that his party had never sent a terrorist back to Pakistan.

The outgoing BJP MP, who is seeking a re-election from Sonipat, is pitted against former Haryana Chief Minister Bhupender Singh Hooda, the seniormost Jat leader of the Congress.

Digvijay Singh Chautala, great grandson of Devi Lal, who, along with his brother, Dushyant, floated the Jananayak Janata Party (JJP) — has made it a triangular contest in Sonipat, where Jats make up 34% of the electorate. Of the about 15 lakh voters in the Sonipat Lok Sabha constituency, spread across nine Assembly segments, more than 5 lakh voters are from the Jat community.

It took seconds for Sant Kabir Nagar MP Sharad Tripathi to rain blows with his shoes on Mehdawal MLA Rakesh Singh Baghel, in full public glare in an incident in March, but it blew the lid off a festering issue that the BJP will have to address after the current Lok Sabha polls are done.

Mr. Tripathi may have earned universal opprobrium for what was extremely unseemly behaviour in March, but the reaction among Uttar Pradesh’s Brahmins, especially in eastern U.P., was one of righteous satisfaction. Mr. Tripathi, who was summoned to Lucknow by party president Mahendranath Pandey on March 7, following the incident, was joined en route by several prominent leaders of the Brahmin community, making it a show of strength. The MP was compared to Parashurama who waged war on Kshatriyas, just as Mr. Tripathi bested Mr. Baghel, who is a Rajput. For the BJP, which has secured the support of upper caste votes, the issue of how to douse this conflict was important. Brahmins with 12% vote and Rajputs with 8% vote share are both significant for the BJP to prevail in the State.

The Odisha government would compensate 8,000 fishermen families who would bear losses due to the fishing ban imposed for protection of the endangered Olive Ridley sea turtles. The annual fishing ban would be in force from November, 2019 to May 31, 2020 during which lakhs of turtles would arrive at the Odisha coast for mass […]

The police have started an inquiry into the death of a minor boy from Pulwama, who allegedly committed suicide hours after his “brief detention and beating” by the Army in the wake of a grenade blast in the area. “It’s a case of suicide; we have started an inquest proceeding,” said Superintendent of Police, Pulwama, […]

Gujarat is under attack from hoppers — new-born locusts — that have flown in across the international border. As the swarms mature, they have ravaged farms in North Gujarat, devastating farmers in the three border districts Banaskantha, Patan and Kutch. Read the full article here. Source: thehindu.com Related