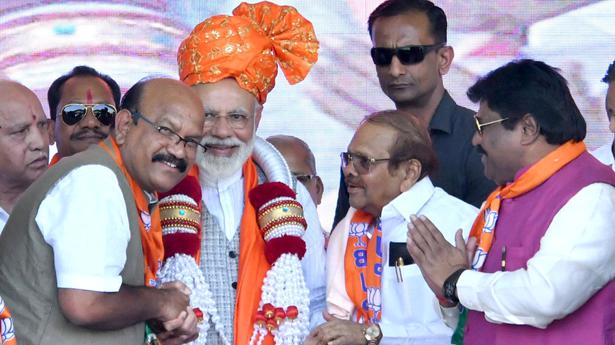 Two former Congress leaders in Karnataka who recently joined BJP figured in its list of candidates named on Thursday for 21 of 28 Lok Sabha seats in the State.

Umesh Jadhav (Gulbarga) and A. Manju (Hassan) will be contesting the ensuing general elections in April.

The seat from the mining district of Ballari will be contested by Devendrappa. B. Sriramulu won the seat in 2014 general elections, but the party lost the seat to Congress’ V.S. Ugrappa in 2018 by-election.

The candidates for Mandya and Bangalore Rural were among the seven yet to be announced.

Popular actor and Mathura MP Hema Malini, who has been busy participating in Holi celebrations in Lord Krishna’s land, will again be contesting from BJP again for the 2019 Lok Sabha elections.

However, in the first list of BJP’s Lok Sabha candidates, there were surprises in store as both sitting MPs from Agra have been replaced.

Both the sitting MPs were facing a lot of flak and criticism for non-performance.

In Bihar, leaders flock to astrologers

With the Lok Sabha election barely three weeks away and the names of candidates expected to be announced shortly, many ticket hopefuls in Bihar are said to be queuing up at the doors of pundits, astrologers and fortune-tellers. Some of them are privately performing special pujas (rituals) in the State, some others are doing so outside of it.

“When the election approaches, politicians from Bihar as well as other States start approaching people like us either to know their poll prospects or to perform special pujas to better their chances,” Noida-based astrologer Swami Sarvabhoot Sharanam told The Hindu over phone. “Every day, I get phone calls from some politicians from Bihar, and even Ahmedabad, to know their electoral fortunes but I perform pujas only for those who actually believe in [the] divinity [of the pujas],” he added.

The humiliating defeat of Congress’s high-profile candidate Randeep Singh Surjewala in an Assembly byelection in Haryana has prompted the party to ask its senior leaders to take up the Lok Sabha challenge.

At the first meeting of the Haryana coordination committee on Tuesday, headed by former Chief Minister Bhupinder Singh Hooda, it was decided that the party should field its “most experienced leaders” in what is increasingly being pitched as a “prestige battle”.

With GJM losing its hold, BJP steps into the breach in the Darjeeling Hills

Prior to September 2017, flags of the Gorkha Janmukti Morcha (GJM), the dominant political force in the Darjeeling Hills, fluttered on almost every household in the region. Not any more.

Much has changed since the violent agitation and the 104-day strike in the hills between July and September that year. As the constituency goes to the polls on April 18, not only have the GJM flags disappeared but large posters of Chief Minister Mamata Banerjee have emerged on the highway leading to the hills.

Federal front will become a reality after the election: K.T. Rama Rao

Telangana Rashtra Samithi (TRS) working president K.T. Rama Rao is confident that the proposal made by his father and party founder K. Chandrasekhar Rao for the formation of a federal gront as an alternative to the BJP- and Congress-led coalitions will become a reality after the Lok Sabha election. Emphasising that “politics is the art of the possible”, Mr. Rao spoke on the prospects of the TRS and other regional parties and the BJP and the Congress.

Political parties yet to comply with RTI Act

In a time of deep political polarisation, refusing to comply with the RTI Act seems to be one of the few issues that has united national parties across the ideological spectrum.

Despite a June 2013 ruling from the Central Information Commission (CIC) that they fall within the ambit of the transparency law, parties insist that they cannot be considered public authorities under the Act.

Six years later, on the verge of another Lok Sabha election, the Supreme Court is set to adjudicate on the issue, with a petition filed jointly by the Association for Democratic Reforms (ADR) and RTI activist Subhash Chandra Agrawal coming up for a hearing on March 26.

Five Maoists are suspected to have died in an exchange of fire with security personnel in Odisha’s Koraput district on May 8 afternoon. According to Koraput Superintendent of Police Kanwar Vishal Singh, the encounter occurred in Padiua police station area. “Details are awaited as the security personnel involved in this operation had not yet returned […]

The small game of deer, bears and lizards in the sparse jungles of the Satyavedu range on Chittoor-Tamil Nadu border see a ray of hope to survive from further reduction of their kind. Thanks to the slow growth of wildlife-friendly ambience at the forest fringe villages. The hillocks from Narayanavanam to Satyavedu hold considerable vegetation […]

The Supreme Court on Monday dismissed a plea challenging the Jammu and Kashmir government’s order restricting civilian traffic for a day in a week on a stretch of the National Highway from Udhampur to Baramulla for the movement of security forces. The State government’s counsel told the Bench comprising Chief Justice Ranjan Gogoi and Justice […]