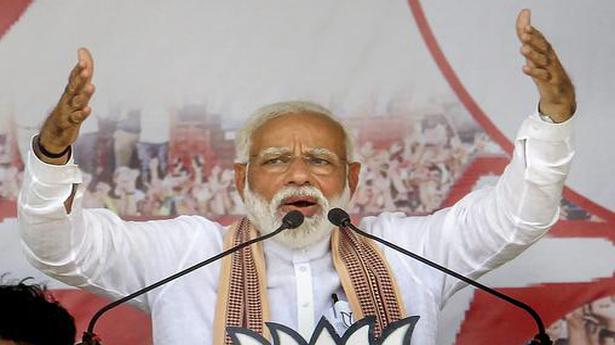 Will our jawans take EC’s permission before opening fire at militants: Modi

As campaigning for the Lok Sabha polls entered its final phase, Prime Minister Narendra Modi on May 12 predicted defeat of the Opposition parties, saying the people were voting for an effective government.

“Opposition parties will fall flat in Lok Sabha polls. This is because people are voting for an effective and honest government,” he said at an election rally in Kushinagar.

Referring to the encounter in Shopian district of Jammu and Kashmir on May 12 morning, the Prime Minister wondered, “Will our jawans take EC’s permission before opening fire at militants? Opposition kya khel bana rakha hai? [What drama is the Opposition enacting?]”

It is clear BJP govt is going: Priyanka Gandhi

Congress leader Priyanka Gandhi on Sunday said it was “very clear” that the BJP will face defeat in Lok Sabha polls as people are “angry and distressed” and will convey their sentiments through voting.

Congress president Rahul Gandhi on Sunday cast his vote in Lok Sabha polls in New Delhi and hit out at Prime Minister Narendra Modi, saying he “used hatred” during the elections but the grand old party “used love”.

Asserting that this elections saw a “good fight” between the two rival parties, Mr. Gandhi said he thought that “love is going to win”.

“Prime Minister Narendra Modi used hatred, we [Congress] love. And, I think love is going to win,” he told reporters, soon after exercising his franchise.

Clad in his trademark kurta-pyjama, he was accompanied by party’s New Delhi candidate Ajay Maken on way to the polling booth, a walking distance from his Tughlaq Lane residence.

“There are four issues in this election, these are not our issues but people’s issues. And most important among these is of unemployment. Then, condition of farmers, demonetisation, Gabbar Singh Tax [mocking GST], corruption and the Rafale issue,” he said. — PTI

(With inputs from Agencies)

Govt. trying to hide poverty behind wall after concealing data on economy: Congress

The Congress on Tuesday accused the government of hiding data, including that of the “lowest” consumption levels in 40 years, and asked it to make it public in order to find solutions to problems plaguing the economy. The Opposition party took a jibe at the “Gujarat model” of development, accusing the BJP government in the […]

Tremors of low intensity were recorded in the catchment area of the Idukki dam and the district headquarters region on Thursday night. The tremors at 10.15 p.m. and 10.25 p.m. were felt in areas adjoining Cheruthoni and the epicentre was reported to be the Vengoor hills inside the Idukki Wildlife Sanctuary. The second tremor lasted […]