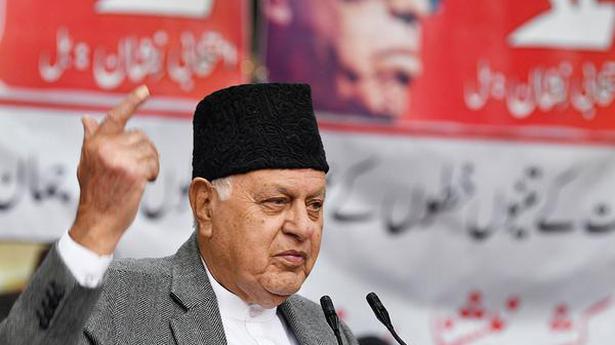 The upcoming general election will be a battle to save India, National Conference president Farooq Abdullah said here on Saturday.

The former Jammu and Kashmir Chief Minister also criticised Prime Minister Narendra Modi for making false promises to the people of the country.

“This election is a battle to save India. It is not just about Jammu and Kashmir. You have to safeguard religious freedom,” Abdullah said here.

“This election is about whether India will remain a secular India or not. It is not a question about Farooq Abdullah, but the question of saving the country. So, remember this (election) is a bigger battle,” he added.

Mr. Abdullah, who is seeking re-election from the Srinagar Lok Sabha constituency, was addressing party workers at NC headquarters.

The NC president added that Mr. Modi had made many promises to the people ahead of the 2014 election, but those promises were not kept.

“He (Mr. Modi) only lies. He made many promises. He said he will create two crore jobs every year, which means ten crore jobs in five years. Where are those jobs,” he asked.

Referring to Balakot airstrikes, he said during the last few days in Parliament, several members said that Mr. Modi had “failed on all fronts and there is nothing to show”, so “he would create a war-like situation to divert the attention of people from the real issues”.

Amid growing disgruntlement in the Bharatiya Janata Party (BJP) ahead of the Cabinet expansion, which is scheduled for Thursday, Chief Minister B.S. Yediyurappa seems to be buying peace by promising a reshuffle in July. Sources in the party said the Chief Minister has spoken to several ministerial aspirants, including those from Kalyana Karnataka region, who […]

The Human Resource Development Ministry has asked the Registrar of the Jawaharlal Nehru University to send an immediate detailed report on the current situation on campus, HRD Secretary Amit Khare told The Hindu on Sunday evening. “Definitely, it is a serious matter. I am speaking with the Vice-Chancellor. We have called for an immediate detailed […]

The Y.S. Jagan Mohan Reddy government in Andhra Pradesh has issued an order for taking legal action against “false, baseless and defamatory news”, restoring a controversial G.O kept in abeyance during his late father-led regime 12 years ago. While the 2007 order issued during late Rajasekhara Reddy’s tenure as Chief Minister was limited to print […]