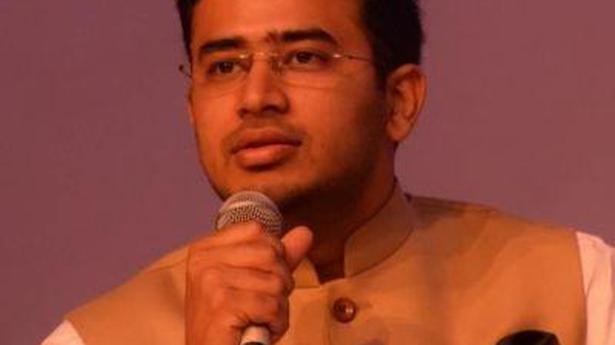 The BJP, past midnight on Monday, declared Tejasvi Surya as the party’s candidate from Bengaluru South, a seat that had been held by late union minister Ananth Kumar till his death last year. This also means that Kumar’s widow, Tejaswi Ananth Kumar has been denied the ticket although her name was recommended by state unit chief B.S. Yeddyurappa publicly.

Mr. Surya (28), considered a fiery orator, is a practicing lawyer at the Karnataka High Court. He is general secretary of the state Yuva morcha and a part of the national social media team.

While not much light was shed on the choice of Mr. Surya over Ms. Kumar, it all started on Saturday during a Central Election Committee (CEC) meet in New Delhi, when Mr. Surya’s name came up and was discussed. Even Prime Minister Narendra Modi’s name was doing rounds as candidate from the seat.

Ms. Kumar was expected to file her nomination papers on Monday but she held back as her name hadn’t been cleared.

Mr. Surya will now take on B.K. Hariprasad of the Congress in Bengaluru South, a seat consistently held by the BJP and by the late Ananth Kumar in particular.

A total of 200 schoolchildren took part in competitions organised by the Department of Endocrinology, Diabetes and Metabolism of Christian Medical College (CMC), Vellore, on Saturday. They were held at Darling Residency as part of the World Diabetes Day. Students painted to answer, ‘If you have diabetes, how can footwear save your feet?’ and the […]

Probably for first time in the history of the Assembly, Speaker Tammineni Seetharam registered his “protest” against the behaviour of the Opposition MLAs in the House. On Tuesday the Speaker left the House in a huff leaving everyone in the Assembly dumbfounded . He did not announce whether it was a break or adjournment. He […]