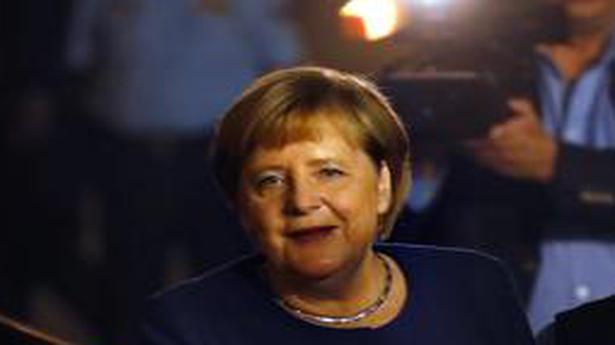 India has invoked certain provisions relating to the national anthem to let German Chancellor Angela Merkel remain seated while the national anthems of both countries will be played during her visit from October 31 to November 2. Sources said the Chancellor would be extended the courtesy on a request from the German side as she was recently seen having difficulties while standing at ceremonies. She was seen seated in ceremonial receptions. Most recently, Ms. Merkel attended a guard of honour with Prime Minister of Denmark Mette Frederiksen at home, but was seated when the national anthems were played.

Officials indicated that Ms. Merkel’s physical movements are unaffected by her medical condition but said the exemption was made as she displayed difficulties while standing in attention.

No saffron, it’s a contest between CPM, NCP in Kalwan reserved seat

Unlike other parts of the State, the saffron colour is conspicuous by its absence in Kalwan with flags and posters of only two political parties visible. The contest in Kalwan in Nashik district is not between Congress-Nationalist Congress Party (NCP) and the Bharatiya Janata Party-Shiv Sena combines. Instead, it is a fight between the Communist […]

U.S. President Donald Trump is expected to raise U.S.’s concerns around the Citizenship Amendment Act (CAA) and National Register of Citizens (NRC) with Prime Minister Narendra Modi, when he visits India next week, as per senior administration officials who had a briefing call with reporters on Friday. Mr. Trump will also encourage a reduction in […]

The tahsildars in Vellore and Tiruvannamalai districts on Monday boycotted work and staged sit-in protests in their respective block and taluk offices against their mass transfer to other districts. With the sit- in protests official work was paralysed in many taluks and blocks in Tiruvannmalai and Vellore districts. The protesting officials said such mass transfers […]