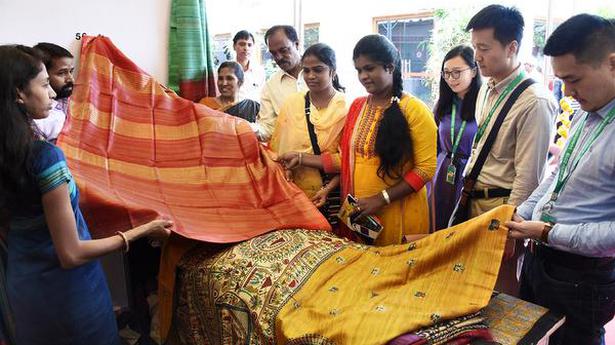 The 6th Asia Pacific Congress of Sericulture and Insect Biotechnology (ASPERI-2019), which began in Mysuru on Saturday, will delve into the scope for using silkworm and silk in frontier areas like industrial, pharmaceutical and nutritional sectors. Substantial R and D activities in this field were already being undertaken in different laboratories across the globe considering its organic nature.

The global event is aimed at boosting worldwide sericulture growth and the participating scientists will be sharing their knowledge and expertise which is expected to catalyse the recent efforts on enlarging the use of silk beyond a mere textile fibre.

With the global silk fraternity attending the event, innovations and developments in the field would be showcased and discussed for their practical applications.

The previous ASPERI had been held in South Korea, Japan, China and Thailand and this is the first Indian edition of the Congress which chose Mysuru as the venue since it is known as ‘Silk City’.

International Sericultural Commission, Bengaluru and the Central Silk Board, Bengaluru have jointly organised the three-day meet which has participation from over 18 countries. The theme of ASPERI-2019 is “Go for Silk, Go for Nature”. More than 250 delegates, including 75 foreigners, were attending.

The ASPERI activities will be spread across six sessions including presentation of country reports, discussions on mulberry, wild silkworms, insect biotechnology, silkworm and post-cocoon technology.

The participating delegates were mostly from the frontier areas of research like biotechnology, biomaterial, nutraceutical, industrial, pharmaceutical and other advanced areas, said a note from the organisers.

In his inaugural address, Prof. Ayyappan called upon the scientists to come out with applications of silk other than using it as a fibre as the produce has several application values that can explored. People engaged in sericulture need to look at both environment and employment as silk is produced in 60 countries. Production is about two lakh metric tonnes of silk annually with bulk of it coming from China and India.

Mr. Hanumantharayappa said India is the second largest producer of silk in the world with about 32 tonnes produced last year. “It is time scientists develop new silkworm breeds and strategies for doubling the income of sericulture farmers besides improving the quality of the silk produced,” he suggested.

As part of ASPERI-2019, a silk exhibition has been organised by the Silk Mark Organisation of India to help the delegates get to know various types of silk.

Siddavva Metri, who served tea and breakfast to B.R. Ambedkar during his visit to Belagavi in 1939, died of age-related complications on Friday. She w Source: thehindu.com Related

It’s unfortunate that a devotee cannot utter the name of his favourite god, NDA candidate Suresh Gopi has said in response to the notice issued to him by the District Collector allegedly for violating the model code of conduct. “I will give an explanation to the Collector,” he said, and added that he had not […]

‘It is especially beneficial to the elderly’ Source: thehindu.com Related