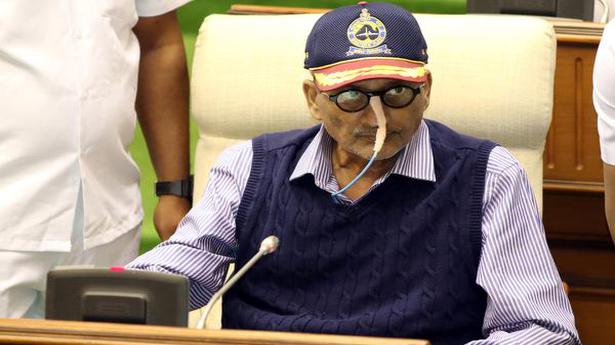 MLAs and core committee members of Goa BJP on Saturday met to discuss the political situation rising out of the health condition of Chief Minister Manohar Parrikar.

The health of Mr. Parrikar, who is suffering from a pancreatic ailment, had deteriorated earlier in the day sparking hectic political activities across parties in the coastal state.

Party sources said that two Central functionaries of the party were expected to arrive in Goa to oversee the meeting of party MLAs and the core committee.

Several BJP leaders on Saturday had said that the condition of Mr. Parrikar, who is suffering from advanced pancreatic cancer, was critical.

Core committee member and former BJP Minister Dayanand Mandrekar said on Sunday, “We will also be discussing that. If Manohar Parrikar was well, there would be no need to change the leader. But because his health is critical now and there is day to day deterioration in his health the party has to take some decision.”

He said, “If the government has to be run you need a Chief Minister, you need a Cabinet leader.”

Dy. Speaker and BJP MLA Michael Lobo had said on Saturday evening that the doctors examining ailing Chief Minister were not saying he will recover. “Mr. Parrikar is very ill since last (Friday) night and doctors are examining him repeatedly and they aren’t saying that he will recover,” Mr. Lobo said, after attending a meeting of BJP MLAs at the party’s state headquarters in Panaji late on Saturday.

Mr. Parrikar  was diagnosed with pancreatic cancer in February 2018.

Billasurgam caves expected to get facelift

Located an hour’s drive from Kurnool is a small village called K.K. Kottala which houses the Billasurgam caves, where geologists have discovered cave art more than 5,000 years old. Despite their stunning beauty, the Billasurgam caves in Betamcherla mandal of Kurnool district have remained an untapped tourist destination — something that the district tourism authorities […]

From swanky IT parks to slums and from commercial areas to premium residential hubs, Bengaluru Central Lok Sabha constituency presents a picture of contrasts. This segment is a Bharatiya Janata Party (BJP) stronghold despite having more Assembly segments won by the Congress. It was carved out of Bengaluru North and Bengaluru South Lok Sabha constituencies […]