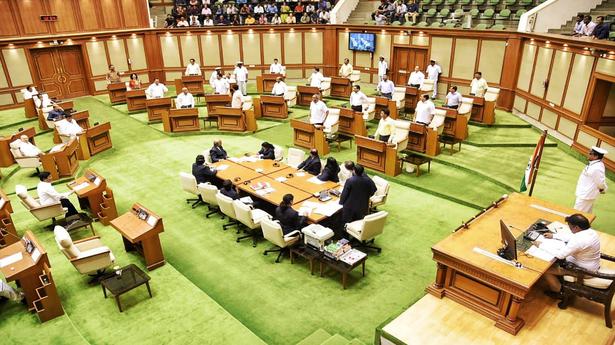 Goa’s new BJP-led coalition government of Pramod Sawant on Wednesday won a vote of confidence on the floor of the Legislative Assembly during a specially convened session.

While the government got 20 votes, the Opposition secured 15 in the 36-member truncated House of 40. Deputy Speaker Michael Lobo was in the chair as Mr. Sawant resigned from the Speaker’s post to become the Chief Minister.

While the treasury benches comprised of 11 members of the BJP, three each of the Maharashtrawadi Gomantak Party (MGP) and the Goa Forward Party (GFP) and three independents, the Opposition had 14 members of the Congress and one from the Nationalist Congress Party (NCP).

Former Minister Pandurang Madkaikar, who had suffered a paralytic stroke, attended the special session and was allowed by the Speaker to raise his hand during the voting by sitting in his place. Four seats are vacant at the moment — two following the resignation of two Congress MLAs in October last to join the BJP, and two due to the death of former Deputy Chief Minister Francis D’Souza in February 2019 and Chief Minister Manohar Parrikar on March 17. Both of them died of cancer.

“I am sitting here only because of Manohar Parrikar. I became an MLA, Speaker and now Chief Minister because of him,” said Mr. Sawant in a choked voice. Overcome by emotions, he paused during his speech on several occasions.

Speaking on behalf of the BJP Legislative party, Cabinet Minister Mauvin Godinho said that the late Chief Minister was a colossal and larger-than-life personality.

“Difficult to get another Manohar Parrikar in this State who built a modern Goa and took the State forward in every aspect of government. He is our pride and the State’s tallest leader who served as Defence Minister and conducted the iconic surgical strikes,” Mr. Godinho said, adding, “His presence was felt in every decision of the State and he impacted life of the people of Goa due to his vision.”

‘Parrikar was a fighter’

“God extended his life for up to a year because Mr. Parrikar was a fighter,” Mr. Alemao said. If Parrikar had lived on, he would have legalised the popular sport of bull fighting in Goa, he noted. Bull fighting was by a high court two decades ago.

Cabinet Minister Ramkrishna alias Sudin Dhavalikar said that an upcoming bridge across the Zuari river would be named after the late Chief Minister. “We have already sought permission from the Central government,” Mr. Dhavalikar told the Goa Legislative Assembly while speaking on the motion of condolence in the House. He was Minister for Public Works in Parrikar’s government.

Parrikar was diagnosed for pancreatic caner in February 2018. Battling advanced pancreatic cancer for over a year, he passed away on March 20, which led to the formation of incumbent BJP-led coalition government.

Several Ministers representing different parties, including Independents and Leader of Opposition Chandrakant Kavlekar, who spoke on behalf of the Congress Legislature Party appreciated Parrikar’s vision and dynamism. The House also paid homage to the departed souls.

New barrage at Mukkombu to have an automatic monitoring system

The Public Works Department plans to install an automatic reservoir monitoring and control system, an advanced computerised control and flood monitoring mechanism, at Mukkombu barrage near here. It is part of the ₹387.60 crore on going project to construct a barrage across the Kollidam river to replace the existing one, a portion of which collapsed […]

The Madras High Court on Friday agreed to hear on Saturday, a working day for the court, a plea for the constitution of a special investigation team by Election Commission to inquire into the issue of alleged unauthorised entry of a woman Tahsildar into a document storage room adjacent to a strongroom housing electronic voting […]

Sri Rama Navami festival was celebrated in a traditional manner at the historic Ramateertham temple of Nellimarla and the Rama Narayanam temple which was constructed in a bow and arrow shape at Y junction of Vizianagaram. On behalf of the government, Nellimarla MLA Baddukonda Appala Naidu offered Pattuvastramulu and Mutyala Talambralu (pearls) to the presiding […]