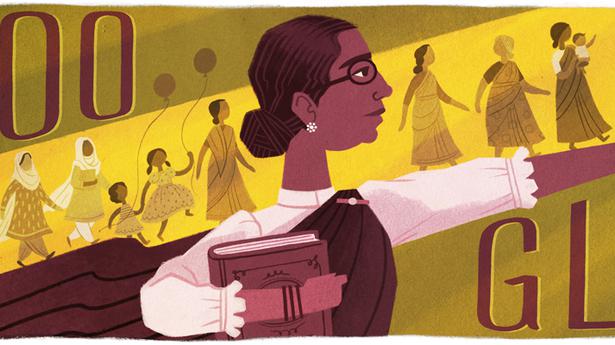 Today’s Google Doodle celebrated Dr. Muthulakshmi Reddi, a surgeon, educator, lawmaker and social reformer, on her 133rd birth anniversary. Dr. Reddi devoted her life to public health and fought the battle against gender inequality. The Government of Tamil Nadu announced on Monday that government hospitals in the State will celebrate her birth anniversary as ‘Hospital Day’ every year.

Born in 1886 in Pudukkottai, Tamil Nadu, Dr. Reddi was the first Indian girl student in the Department of Surgery at Madras Medical College. This was just one of her many firsts. She became one of the first women doctors in India in 1912, and the first woman house surgeon in the Government Maternity Hospital, Madras.

She co-founded the Women’s Indian Association in 1918, and as the first woman member (and vice president) of the Madras Legislative Council — making her the first woman legislator in India — she helped raise the minimum age for marriage for girls and pushed the Council to pass the Immoral Traffic Control Act, and the Devadasi system abolishment Bill.

She resigned from the Council to support the Salt Satyagraha. When three young devadasi girls knocked on her door in 1930, she established the Avvai Home to shelter and educate girls like them.

Here is Dr. Reddi herself on the role of women in an article published in the August 15, 1947 Independence Day edition of The Hindu:

“Indian women have a great role to play in the modern world, with its chaos and rumblings of another war. With their background of philosophy and religion, with their apprenticeship under Gandhian leadership, with the sense of motherhood strong in them they can be and should be the ambassadors of love, peace and unity. It is the Gandhian concept of non-violence alone that can save the world from a cataclysm. And it is the women of India alone who can carry the message best so that the world may come together in unity and peace.”

The Doodle showing Dr. Reddi guiding young girls and women was created by Bangalore-based guest artist Archana Sreenivasan. The Doodle page also displays other early concepts drawn by the artist for this occasion.

Release of ‘Valmiki’ stalled in Anantapur

The release of Telugu film Valmiki, a remake of Tamil movie Jigarthanda, on Friday was stalled in Anantapur district with a number of people from the Valmiki community raising objections over its title. The film is a gangster comedy entertainer, directed by Harish Shankar and actors Varun Tej, Atharvaa Murali and Pooja Hegde in the […]

Trekker trampled to death by wild elephant in Coimbatore

A 40-year-old woman, who allegedly went trekking along with her husband and friends into a reserve forest near Periyanaickenpalayam in Coimbatore without the permission of the Forest Department, was trampled to death by a wild elephant on Sunday. While P. Bhuwaneshwari, a resident of Ganapathy Managar in Coimbatore, was killed, the others managed to escape. […]