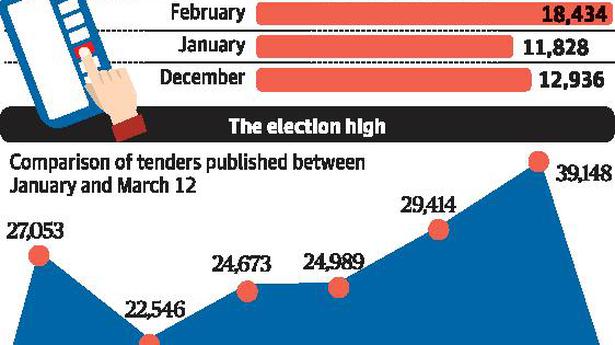 For the past two months, the State bureaucracy seemed to be extra busy as they scrambled to push as many tenders as they could before the constraints of the model code of conduct for the Lok Sabha elections could come into force.

Since March 1, many State agencies and departments pushed 8,886 tenders, including projects such as elevated corridors or the expensive white-topping of roads in Bengaluru, construction of check dams and drinking water projects in drought-affected areas, a slew of projects in “Smart Cities” — a key programme being implemented by the Centre, and roadworks in numerous constituencies.

Furthermore, 377 tenders were uploaded on Karnataka’s e-procurement portal after 5 p.m. on March 10 when the Chief Election Commissioner of India announced the elections.

The press conference is considered by officials to be the start of the model code of conduct which prohibits publishing or finalising of tenders without the permission of local election committees.

While the last quarter of the year — January to March — sees the most tenders called because of the delays in getting approvals or finances, multiple officials who spoke to The Hindu on the condition of anonymity said political pressure also plays a role in pushing tenders before key elections.

To get an idea of the mad scramble, one has to only look at the sheer volume of works being tendered and published on the e-procurement portal.

In 2018, which also saw the Assembly elections in Karnataka, 29,414 tenders had been published between January 1 and March 12. However, in two weeks prior to the declaration of the elections on March 27 last year, 7,074 tenders were called.

In the run-up to elections, officials — particularly in civic administration — were asked to schedule inaugurations of projects in constituencies. In addition, tenders, which signify the approval and start of works, become talking points during local campaigns, said officials. “When confronted with road or water issues, politicians can then tell their constituents that work is in progress, and tenders are the first step to it,” said an official.

In other cases, officials said that once a tender is published, the process of finalising it — scrutiny of bids and taking internal approvals — can be done during the two months the model code of conduct would be in force whereas tenders cannot be finalised.

However, 377 tenders were published after the cut-off, including 179 on March 11 and 12. Sanjiv Kumar, Chief Electoral Officer (CEO) of Karnataka, who held a press conference on March 10, clarified that the model code of conduct is assumed to have started at 5 p.m. on March 10. “All tenders published after this time is considered illegal,” he said.

The e-procurement portal, run by the e-governance Department, will continue to run as officials can upload tenders that have been approved by the Election Commission and its designated committees. “We do not stop our State departments from uploading their tenders during this time. However, the moment the code of conduct is enforced, we carry an advisory informing officials that Election Commission permission is mandatory,” said Sunil Panwar, Director of Electronic Delivery of Citizen Services.

Over 100 sculptures recovered from two hoblis in Mysuru

The ongoing pilot project on documentation of all unprotected monuments in Mysuru taluk has yielded significant results with over 100 sculptures recovered from the rural hinterland. Launched by the State Department of Archaeology, Museums and Heritage, the project will help map and document the number of monuments in the taluk. Based on their importance, they […]

Govt. holds another round of talks with NSCN-IM; separate flag, constitution sticking point

The Centre on Monday held another round of talks with the NSCN-IM, the major insurgency group in Nagaland, aiming to hammer out differences, particularly on the outfit’s demand for a separate flag and Constitution for the Nagas, and inch closer to a solution to the seven decades old problem, officials said. A team of the […]