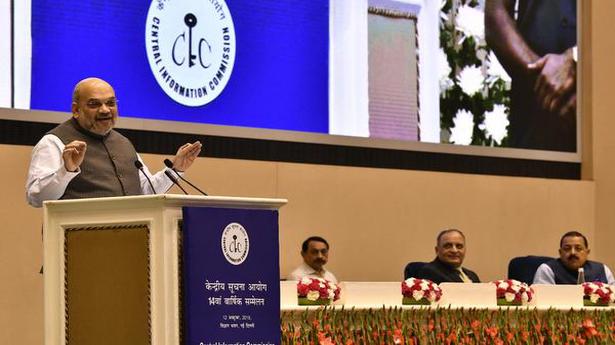 The objective of the Modi government is to proactively put out as much information as possible in public domain to reduce the need for RTI applications, Union Home Minister Amit Shah said on Saturday.

The success of a government does not lie in the high number of Right to Information (RTI) applications, Mr. Shah said while addressing the 14th annual convention of the Central Information Commission (CIC) here.

“We want to introduce a system where people do not feel the need to file an RTI application to get information,” the home minister, who was the chief guest at the event, said.

The dashboard system introduced by Prime Minister Narendra Modi has ensured that everyone gets information about ongoing schemes online without filing RTI applications, Shah said.

Asserting that RTI should be there, Mr. Shah said the government has gone two steps ahead of the law in ensuring transparency.

“I have a request to the CIC, that you not only dispose of RTI applications but also inform people about the steps that have been taken to ensure that we do not need to file RTI applications,” the home minister said.

Mr. Shah said during the last 14 years, the country has been successful in fulfilling the intention of framing the law. The fundamental thought behind the RTI Act is to build the trust of the public in the system, he said.

In a country like ours, it is important that trust and involvement of people in the rule and system are strengthened, the home minister said.

The mistrust was so deep that it seemed difficult that people will be able to come out of it, Mr. Shah said.

“During the last 14 years, we have been able to fill gap of mistrust using the RTI. The trust of the people in the administration and the system has awakened,” he said.

“When we assess the results of the RTI, we find that transparency has been increased, corruption has been reduced and the speed of governance has also been increased due to the RTI Act. We are heading towards a digitally empowered society,” the home minister said.

Nepal and Indonesia said they were studying India’s decision to restrict import of palm oil products, which understandably is aimed at Malaysia that recently has criticised India’s actions in Kashmir and the Citizenship (Amendment) Act 2019. The diplomatic comments poured in as the Commerce Ministry sources said the restriction of palm oil is not meant […]

64 people died in Delhi while cleaning sewers since 1993: National Commission of Safai Karamcharis

New Delhi, Sep 24 (PTI) The National Commission of Safai Karamcharis (NCSK) on Tuesday said 64 people have died while cleaning sewers in Delhi since 1993 with 38 such deaths taking place in the last two years. NCSK Chairman Manhar Valjibhai Zala claimed that the Delhi Government has not been implementing the Prohibition of Employment […]

Around 450 Maoist sympathisers, including more than 100 former militia, snapped their ties with the organisation and surrendered before the police at Mathili in Odisha’s Malkangiri district on Sunday. They were from more than 10 villages of Mahupadar panchayat, a traditional stronghold of the Maoists. Many of them were engaged in providing logistics and other […]