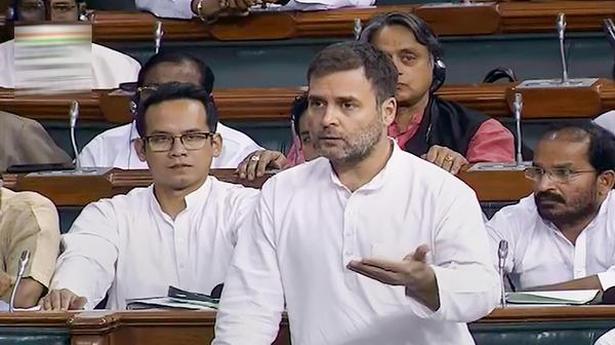 Attacking the Modi government over the “suffering” of farmers, Congress leader Rahul Gandhi said it has given them no relief and wondered if it considered them “inferior” to businessmen who have been given concessions and loan waivers running into lakhs of crores.

Union Minister Rajnath Singh countered Mr. Gandhi’s charge in Lok Sabha, as he blamed the long rule of the Congress for the plight of farmers and asserted that no Prime Minister has done as much for peasants as has Narendra Modi.

Taking up the issue in the Zero Hour, Mr. Gandhi in his brief speech mostly focused on Kerala and made specific mention of problems facing farmers in Wayanad, from where he has been elected to the Lok Sabha.

No relief has been given to farmers by the government, he said, claiming that businessmen have been granted concessions of ₹4.3 lakh crores and loan waivers of ₹5.5 lakh crore.

He asked why the government thinks farmers are “inferior” to rich businessmen.

This is the first time that Mr. Gandhi has raised an issue in the 17th Lok Sabha.

In his reply, Mr. Singh said the government’s move to give ₹6,000 to farmers will lead to a rise in their income by 20-25% and claimed that more farmers committed suicide before the BJP-led dispensation came to power.

“It is not that the condition of farmers deteriorated in the last one, two or four years. Those who ruled the country for a long time are responsible for their state. The amount of increase in MSP [minimum support price] that our Prime Minister has effected has not been done by anybody in independent India’s history,” he claimed.

Mr. Gandhi said farmers are suffering throughout the country and are in terrible condition in Kerala, he said, adding that one farmer ended his life in Wayanad.

Farmers have been facing threats of immediate eviction from their properties, he said, as banks from which they had taken loans have begun recover process.

18 farmers in Kerala have committed suicide due to this, he added.

Mr. Modi had made a lot of promises to farmers and the government should fulfil them, Mr. Gandhi said.

As soon as Mr. Gandhi finished his speech, other Congress leaders wanted to raise the issue of desertions of MLAs from their party’s ranks in Karnataka and Goa, for which they have blamed the BJP.

With the Speaker not permitting them to speak on the matter, they staged a walkout and were joined by other Opposition parties like the TMC and BSP.

The Maldives has said that India’s decision to amend Article 370 and bifurcate the State of Jammu and Kashmir into two Union Territories is an internal matter for the country, adding that every nation has the right to amend their laws as required. India revoked provisions of Article 370 which gave special status to Jammu […]

When the trailer of the Vijay Ratnakar-directed The Accidental Prime Minister, based on Sanjaya Baru’s book on former prime minister Manmohan Singh, was rel­eased on YouTube in December 2018, the BJP lost no time sharing it on its official Twitter handle. That enthusiasm seems to be missing for the Narendra Modi biopic, PM Narendra Modi, […]

Warangal is the fastest growing city in the State, particularly after the formation of a separate Telangana, said Finance Minister T. Harish Rao on Sunday. With its new institutions and better facilities, improved road network and other infrastructure, Warangal city is the most sought-after place after Hyderabad, he added. Mr. Harish Rao was speaking after […]