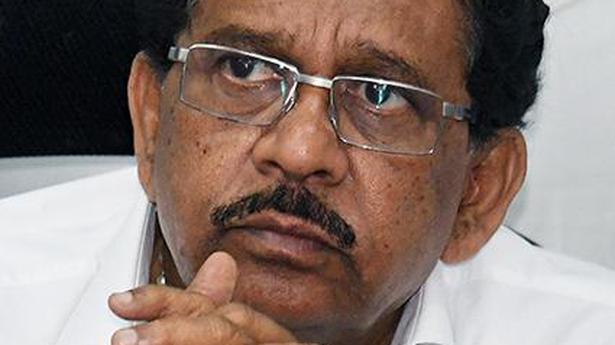 Deputy Chief Minister G. Parameshwara has expressed confidence that nothing would happen to the coalition government even after May 23 and it would complete its four-year term.

Mr. Parameshwara, who was in Hubballi on Saturday to attend a private function, told presspersons at the airport that the BJP leaders had been repeatedly saying that the government would fall after May 23 and a new government would be formed. But nothing of that sort would happen, he said.

The Deputy Chief Minister said the Congress would win in the byelection to Kundagol and Chincholi Assembly constituencies and the result of the parliamentary elections would not have any adverse impact on the coalition government in Karnataka.

On the participation of Congress leaders in a dinner party hosted by Mandya’s Independent candidate Sumalatha, Mr. Parameshwara said that KPCC president Dinesh Gundu Rao had sought a report on the development and a decision would be taken based on the findings in the report.

Expressing displeasure over the way the Election Commission (EC) was functioning, Mr. Parameshwara said that because of the EC guidelines, the government was not able to hold meetings on drought-relief works resulting in hardship to the people.

“We wrote to the EC seeking permission to hold official meetings on drought relief. However, it replied to us saying that we cannot hold meetings,” he said.

Two alleged terrorists of a banned Manipur-based organisation were arrested from Burari area, police said on Monday. The accused have been identified as Laishram Mangoljao Singh and Hijbur Rahman, both residents of Manipur, they said. The wanted terrorists, against whom Non-Bailable Warrants were issued by the courts concerned, were apprehended from Nirankari Sarovar Bus Standon […]

Do not allow adversaries to take advantage of India’s focus on COVID-19: Rajnath to military

Defence Minister Rajnath Singh on Friday directed the top military brass to ensure that India’s adversaries do not get any opportunity to push their “evil design” by taking advantage of the country’s focus on fighting the coronavirus (COVID-19) pandemic, officials said. Coronavirus India lockdown Day 31 updates Reviewing India’s military preparedness at a high-level meeting, […]