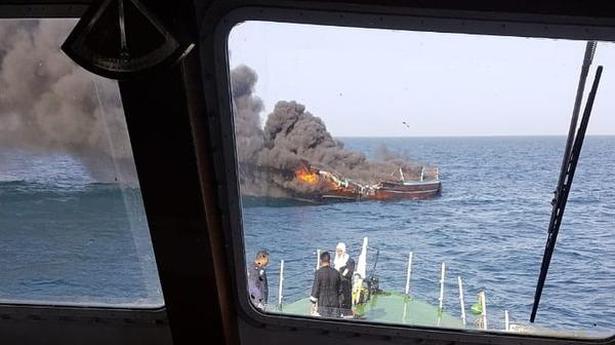 In a sensational mid-sea operation jointly conducted by the Indian Coast Guard (ICG) and Gujarat’s Anti Terrorist Squad (ATS) off Gujarat coast, nine Iranian nationals who were reportedly smuggling 100 kg of heroine worth ₹500 crore through sea route were nabbed on Wednesday.

According to the details, the ATS had received intelligence that a huge consignment of drugs was being smuggled in an Iranian boat through the sea route from Pakistan. After the intelligence inputs, the ATS, jointly with ICG and Marine Task Force, launched the operation in an ICG ship off Porbandar coast in Gujarat.

“After more than 24 hours of search, a suspicious boat was identified while making an attempt to communicate in the particular frequency. ICG ship stealthily started following the boat. ICG ship directed the suspected boat to stop,” the release added.

“Instead, the suspected boat made desperate attempts to run away, but was unsuccessful. ICG ship chased the boat and when apprehension became inevitable, its crew set the boat ablaze to destroy the evidences.”

However, the ICG and Marine Task Force commandos cornered the boat and apprehended nine smugglers. They also managed to take possession of 100 kg of contraband from the boat, which eventually sunk due to heavy load of fuel and gas cylinders on board.

A joint media briefing by ATS and ICG is expected at ICG headquarters in Porbandar on Wednesday evening when more details regarding the joint operation will be shared by the agencies.

Deputy Commissioner Y.S. Patil has said that a decision has been taken to set up five vegetable and fruit markets for retailers. Addressing a press conference here on Tuesday, he said that the new markets will come up near Shivagiri temple, Sindgi check-post; Horti-Solapur Highway near M.B. Patil Nagar; near Satellite Bus Stand on Athani […]

Prime Minister Narendra Modi on Tuesday cast his vote in Gujarat for the Lok Sabha polls and said the power of a “voter ID” was much more than the “IED” (Improvised Explosive Device) of terrorists. Mr. Modi appealed to people to come out in large numbers to vote in all the remaining phases of the […]

Award-winning film director Adoor Gopalakrishnan has questioned the decision of a court in Bihar to investigate him, and 48 other prominent persons on the charge of sedition for having penned a letter to Prime Minister Narendra Modi expressing worry over the increasing instances of cow vigilantism fuelled lynchings of minorities and Dalits in the country. […]