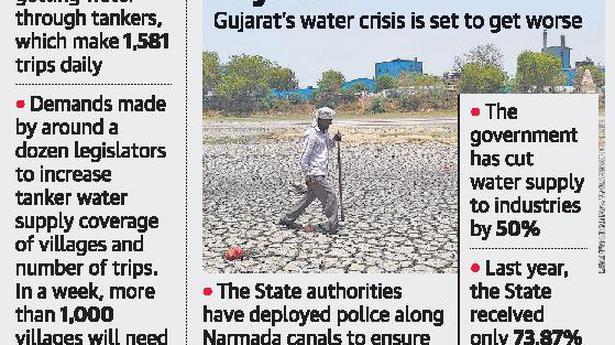 With rising mercury levels and severe heatwave, Gujarat is facing a massive water crisis. The scarcity is particularly acute in the Saurashtra region, Kutch, North Gujarat and parts of tribal pockets in central and South Gujarat.

More than 20 districts are severely affected as towns and villages hardly get water twice a week. In more than 500 villages in 14 districts, drinking water is being supplied through tankers; the number will only rise in days to come.

Recently, Gujarat Chief Minister Vijay Rupani admitted that the State is in the midst of a major water shortage but assured that drinking water will be provided to every village. Except the Narmada, all other waterbodies and dams have negligible water, he said.

“The available water in all the dams of these regions is negligible. However, thanks to the Sardar Sarovar dam and the Narmada canal network, people will not face any difficulty till July-end. Water is available in the dam. The only challenge is to supply it to far-flung areas, some 500 km away from the dam,” Mr. Rupani said after reviewing the situation.

Subsequently, the State government asked the district administrations to start plying tankers in villages where water was not available.

“After a review and reports from local authorities, we have decided to provide drinking water to villages located in different districts by tankers so that people don’t face any shortage,” said Deputy Chief Minister Nitin Patel.

According to officials, the number of villages needing water tankers will only rise due to high temperatures that push the demand.

In Rajkot, water is supplied only for 20 minutes a day and in many localities and societies located on the outskirts, supply is on alternate days or through tankers.

Even in Jasdan, the Assembly constituency of Kuvarji Bavalia, the Water Supply Minister, shortage of drinking water forced villagers to hold protests demanding its regular supply.

Local legislators have made representations demanding adequate water supply in areas where the Narmada water is the only source now.

“In my area, more than two dozen villages are facing acute shortage. I have written to the Minister and demanded that all villages are provided water through tankers and tanker trips be doubled,” said Congress legislator Virji Thummar from Amreli district.

Preparations under way for anti-CAA event in Vijayapura

Preparation are under way for the anti-Citizenship (Amendment) Act programme near Jumanal village on Kolhar Road in Vijayapura. The event will be held on Monday, starting from 3 p.m. and expected to last till around 10 p.m. “We are completing the preparations for the event and over 1 lakh people are expected to take part […]

India lashed out at Pakistan for raising the issue of women’s rights in Kashmir in the UN Security Council, saying the country represents a system that has been exporting terrorism and “regressive” extremist ideologies and “stifling” women’s voices for narrow political gains. India’s strong response came after Pakistan’s outgoing UN envoy Maleeha Lodhi commented on […]

Members of the Tamil Nadu State Sand Lorry Owners’ Federation want online sale of river sand to be streamlined according to the supply available. The State has a demand for nearly 20,000 loads of sand daily. But, only 1,000 loads were being provided. While nearly 87,000 vehicles have registered for purchase of sand online, only […]