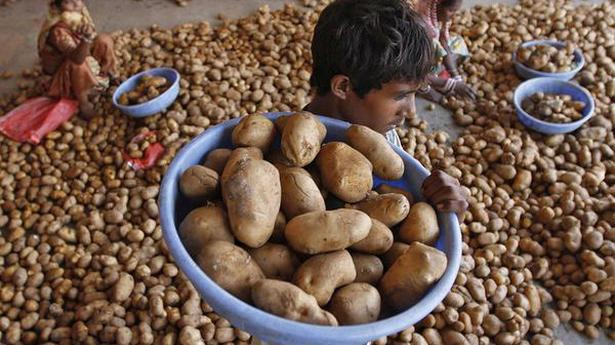 With protests coming from all ends of the political spectrum, the Gujarat government has decided to back four potato farmers in their fight against PepsiCo’s ₹4.2 crore lawsuit against them for allegedly infringing its rights by growing the potato used in Lays chips.

A senior official told The Hindu that the State government will join the ongoing legal case on the side of the farmers, just hours after senior Congress leader Ahmed Patel slammed PepsiCo and said the State “shouldn’t keep its eyes shut”.

“We will be joining in the matter as a party to support farmers,” a top government official said, refusing to be identified.

He added that the decision to support farmers in the matter was taken at the highest level in order to protect the interests of the farmers. Gujarat produces 33 lakh tonnes from its 1.21 lakh hectares planted with the potato crop, with Banaskantha recently pipping Uttar Pradesh’s Agra to become the country’s largest potato producing district.

Senior Congress leader from Gujarat Ahmed Patel said it was a “wake-up call” for the ruling Bharatiya Janata Party (BJP) government. “Why have they been sleeping for so long when an MNC is taking our farmers to court? The Centre is yet to take any action, the Protection of Plant Varieties and Farmers’ Rights Authority should have intervened,” he told The Hindu, adding that this case could have widespread implications for other farmers across the country.

He pointed out that farmers are already facing losses and struggling in a drought situation. “Farmers will grow as the market dictates. Foreign companies cannot dictate what our farmers must or mustn’t cultivate. In the Congress manifesto, we have promised a kisan (farmer) budget. We are not against corporates, but farmers’ interests must take priority,” he said.

Political pressure from all corners has been on the rise, with farmers’ groups affiliated to the ruling BJP, including the Bharatiya Kisan Sangh, as well as those linked to the Left parties, threatening a boycott of Pepsi products and demanding government intervention.

PepsiCo has already offered to settle the case out of court in the wake of boycott calls, which have spread to global social media. However, the company is still insisting that the farmers stop using its registered variety of potato and surrender their existing stocks, or join its corporate farming programme which involves an exclusive buyback clause. The farmers are considering the offer. The case next comes up for hearing in an Ahmedabad civil court on June 12.

While the company has invoked the Protection of Plant Varieties and Farmers’ Rights (PPV&FR) Act, 2001 to claim infringement of its rights, farmers groups point out that the Act specifically allows the Indian farmer “to save, use, sow, resow, exchange, share or sell his farm produce including seed of a variety protected under this Act” so long as he does not sell “branded seed”.

Farmers groups have also demanded that the Centre intervene in the matter and bear the farmers’ legal costs.

The Airports Authority of India (AAI) in Agartala lodged a complaint with the police after spotting a job advertisement in a leading local daily which turned out to be fake, thereby saving many from being duped. The advertisement, from crewaviationservices.com, called for online applications for many vacancies under AAI at Agartala. It demanded ₹1000 for […]

Farmers across Gujarat have launched State-wide protests demanding immediate disbursal of crop insurance claims for damage to their standing crops due to unseasonal rains in October and November. The protests have been launched against crop insurance companies, which are apparently not passing claims filed by farmers in more than 20 districts, which were lashed by […]

Amid social distancing protocols and a nationwide lockdown, Uttar Pradesh Chief Minister Yogi Adityanath early on Wednesday participated in an event to shift the idol of an infant Lord Ram to a temporary structure in the Ram Janmabhoomi compound in Ayodhya till the construction of a Ram Temple. Mr. Adityanath’s action stares in the face […]