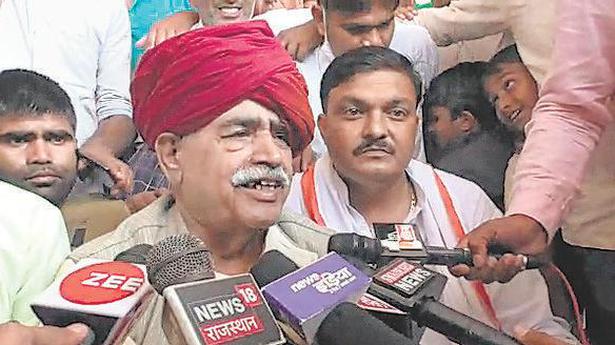 After an 11-day-long stalemate, Gujjars, demanding reservation in jobs and education, on Wednesday signed an agreement with the Rajasthan government, covering the crucial aspects of backlog posts, ongoing recruitments, withdrawal of criminal cases and rehabilitation of the families of those killed during previous agitations.

The pact was signed with the members of a Cabinet Sub-Committee here after six-hour marathon talks, while Gujjars continued to occupy the Delhi-Mumbai railway track in Bharatpur district. Gujjar leader Vijay Bainsla said the decision on calling off the agitation would be taken after consultation with the community members at the site of the stir.

Gujjar supremo Kirori Singh Bainsla met Chief Minister Ashok Gehlot at his official residence after signing the agreement late in the night. The signatories on behalf of the State government were Energy Minister B.D. Kalla and Ministers of State Tika Ram Jully and Subhash Garg.

According to the six-point pact, a committee will examine the issue of extending 5% reservation under the Most Backward Class (MBC) category in the ongoing recruitments and also study the provisions made in other States. Regular pay scale will be given to 1,252 MBC candidates on the completion of their probation period, while the arrears will be subject to the outcome of some court cases.

Mr. Bainsla told reporters that the important issue of appointments to the backlog posts for the period between 2015 and 2019, when a State law created the MBC category, would be resolved in the spirit of the February 15, 2019 agreement signed at Malarna Dungar. The State government will seek an early disposal of special leave petitions on the quota issue pending in the Supreme Court.

Other subjects dealt with by the agreement included financial assistance of ₹5 lakh and government jobs to the next of kin of Gujjars who died in violence during the earlier agitations, monitoring of withdrawal of cases registered against protesters and an increase in the capacity of MBC girls’ hostel in Jaipur.

Chief Secretary Niranjan Arya, Director-General of Police M.L. Lather and senior officers of the Law and Justice Department were present at the meeting of the 17-member delegation of Gujjars with the Cabinet Sub-Committee at Vidyut Bhavan guest house here.

The talks between Gujjars, who started their agitation on November 1, and Minister of State for Youth Affairs and Sports Ashok Chandna in Bharatpur and Karauli districts had earlier ended twice without conclusion. The State government had then invited the representatives of Gujjar Aarakshan Sangharsh Samiti for negotiations in Jaipur.

The State Assembly had passed the Rajasthan Backward Classes (Reservation of Seats in Educational Institutions in the State and of Appointments and Posts in Services under the State) Amendment Act, 2019, on February 13 last year. The four other nomadic communities given the quota benefit along with the Gujjars were Banjara, Gadia-Lohar, Raika and Gadariya.

The second edition of the Rain International Nature Film Festival drew to a close at Kumarakom on Sunday. One man dies a million times directed by Jessica Oreck won the Cristal Elephant award for the best feature film. Pani directed by the Marathi film maker Adinath Kothare, received the special jury award in the same […]