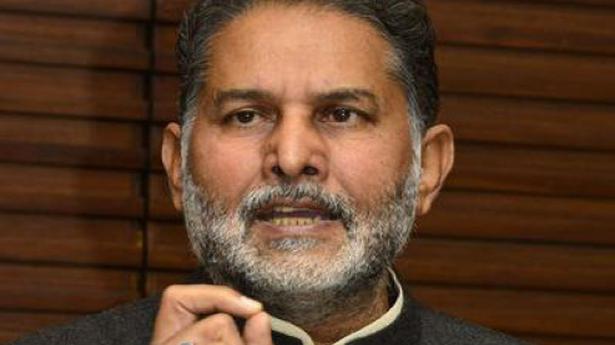 As the ruling BJP and the Congress are engaged in a close electoral battle in the Haryana Assembly elections, as many as six Ministers in the State government were trailing, as per early result trends.

According to the Election Commission’s trends — Education Minister Ram Bilas Sharma was trailing by a margin of 3,576 votes against the Congress’s Rao Dan Singh in the Mahendergarh Assembly segment. Finance Minister Capt Abhimanyu was trailing in the Narnaund seat against Jannayak Janta Party’s Ram Kumar Gautam by a margin of 9,039 votes.

BJP’s Haryana State unit president Subhash Barala was also trailing in the Tohana seat by a margin of 25,090 to Jannayak Janta Party’s Devender Singh Babli. Also, Haryana Assembly Speaker Kanwar Pal, a BJP MLA from Jagadhri, was trailing the Congress’s Akram Khan by a margin of 7,915 votes, till the filing of this report.

BJP’s senior Minister and five-time MLA Anil Vij was leading in his Ambala Cantt seat by a margin of 16,105 votes over Independent candidate Chitra Sarwra. After trailing, Minister Karan Dev Kamboj in the Radaur seat has taken a lead of 2,073 votes against Bishan Lal of the Congress.

National Tourism Day is observed every year on January 25. This year, there has been no sign of any programmes being organised at the memorial of King Rajendra Chola I (CE 1014-1044), located at Brahmadesam village in Tiruvannamalai district. A deserted site: The stone inscriptions at the Chandramouleeswarar Temple, inside the memorial for king Rajendra […]

Congress MP H. Vasanthakumar was detained on the charge of violating the Representation of the People Act, 1951, while passing through the Nanguneri Assembly constituency on polling day. He was released a few hours later, after the police registered a case against him under Sections 143 (unlawful assembly) and 171 h (illegal payments in connection […]

A 24-year-old woman was killed on Tuesday in heavy shelling by the Pakistan Army, targeting villages along the Line of Control (LoC) in Jammu and Kashmir’s Poonch district, officials said. Shameema Akhtar, a resident of Noona-Bandi, was killed in the Pakistani shelling in the Shahpur sector, Poonch District Development Commissioner Rahul Yadav told PTI. He […]