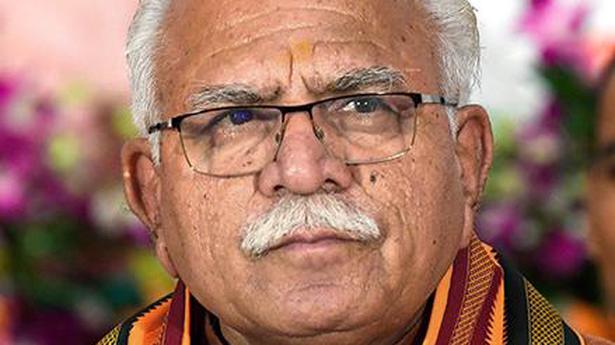 Haryana Chief Minister Manohar Lal at a function here over the weekend suggested that the management committees of private schools should adopt government schools in their neighbourhood.

But a similar project launched in his own constituency had sank without a trace five years ago because of alleged lack of coordination and apathy of the government officials.

As per the official press statement, Mr. Lal in his address at the function to lay the foundation stone of a school building in Dhankot village on Saturday claimed that private schools in Karnal had adopted 50 government schools, but District Education Officer Ravinder Chaudhary, when contacted, said he had no information about any such programme being run in the district.

“It usually takes a few days for the information to reach us. It must be at the higher administrative level. I have no clue about it,” said Mr. Chaudhary.

Rajan Lamba, president of Sahodaya Schools Complex Karnal, an association of the CBSE-affiliated schools of the district, told The Hindu over phone that around a dozen private schools in Karnal had adopted a few government schools in their neigbourhood soon after the Bharatiya Janata Party came to power in October 2014 at the behest of Mr. Lal, but the project failed within six months.

“Exhorted by the Chief Minister, the management of around a dozen schools came forward to work in tandem with the government schools in their neighbourhood. But it failed to work because of a host of factors. We offered our playgrounds, laboratories and even staff to help the government schools, but the principals of these schools mistook it for an interference in their functioning and never co-operated,” said Dr. Lamba.

He said that almost after six months of efforts, the private schools slowly withdrew themselves from the programme.

Dr. Lamba, also principal of Tagore Bal Niketan School, said there was no mechanism for the feedback, no recognition for the good work done by the private schools and no one in the administration would listen to them.

“The government schools have more qualified and better paid staff than private institutes. They can do better than the private schools, but the government lacks the will,” said Dr. Lamba.

Arani constituency MP, M.K. Vishnu Prasad, alleged that there were several hundred cases of the money meant for actual beneficiaries being diverted to those with ‘similar’ names Source: thehindu.com Related

The National Disaster Response Force (NDRF) and the Indian Coast Guard have been put on high alert and fishermen asked not to venture into the sea as cyclone ‘Fani’ is expected to intensify into a very severe storm by Tuesday, the Home Ministry said on Monday. The cyclonic storm ‘Fani’, on Monday morning, was located […]