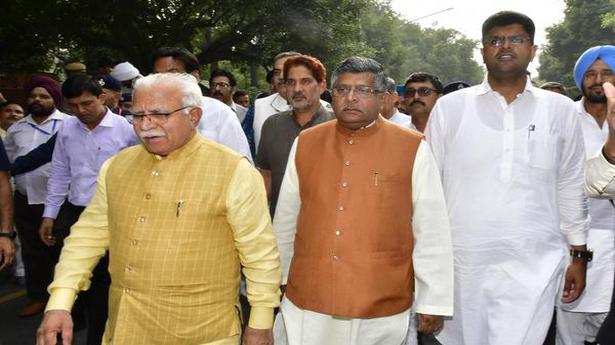 The BJP on October 26 staked claim to form the government in Haryana with the support of the Dushyant Chautala-led Jananayak Janta Party (JJP), party sources said in Chandigarh.

“The Haryana Governor has invited us to form the government on Sunday,” Mr. Khattar said.

He added that the oath-taking ceremony will take place at 2.15 p.m. on October 27, the day Diwali will be celebrated across the country.

JJP leader Dushyant Chautala also met the Governor and gave his party’s letter of support to him.

The JJP has extended support to the BJP.

Mr. Khattar added that a total of 57 MLAs — 40 of the BJP, 10 of the JJP and seven Independents — staked claim before the Governor for forming the government in Haryana.

Some of the Independent MLAs, who have pledged their unconditional support to the saffron party, were also present.

Notably, the BJP has said it will not take the support of Sirsa MLA Gopal Kanda, a controversial politician who faces two abetment-to-suicide cases, for forming the government in Haryana.

Earlier, Mr. Khattar was unanimously elected as the leader of the BJP’s legislative party in Haryana, with the BJP claiming that it would provide a “stable and honest” government in Haryana with the support of the JJP.

The BJP also clarified that there would be only one Deputy Chief Minister in the party-led coalition government in the State.

Visva-Bharati University has evicted a student from its hostel for recording on his mobile phone the speech of Vice-Chancellor Bidyut Chakrabarty during the Republic Day function. The university maintained that the video was used to defame the Vice-Chancellor and therefore the student was responsible. The student, Bijju Sarkar, who hails from a village in Bankura […]

The Supreme Court on Wednesday agreed to hear on October 18 a plea seeking directions for interim protective measures for insuring around 15 lakh customers whose money is blocked in the scam-hit PMC Bank. The Punjab & Maharashtra Co-operative Bank has been put under restrictions by the Reserve Bank of India (RBI) following the discovery […]

Over three months, between March and May, domestic airlines will induct nearly 21 planes to help reduce the impact of reduction in capacity due to the grounding of over 95% of Jet Airways fleet, a top official of the Ministry of Civil Aviation said on Tuesday. “From the beginning of March eight planes have been […]