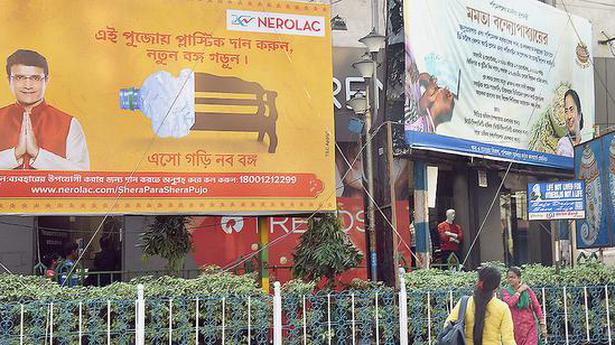 While the cricketing world and the press were busy watching the conference announcing Sourav Ganguly as the next Board of Control for Cricket in India chief, political circles in West Bengal are trying to figure out his role in State politics.

While the State BJP has earlier challenged Mr. Ganguly on his turf – the Eden Gardens, the Trinamool Congress leaders are clearly not comfortable with the idea of him emerging as the face against Chief Minister Mamata Banerjee.

Till 48 hours ago, Mr. Ganguly was considered a staunch pro-TMC person. The CM backed him as the president of the Cricket Association of Bengal, raising many eyebrows, following the demise of Jagmohan Dalmiya in 2015. Their proximity is literally visible as one passes the Eden Gardens with the billboards, featuring the Chief Minister and the CAB president, side by side.

Mr. Ganguly returned Ms. Banerjee’s favour by refusing Prime Minister Narendra Modi’s offer to join the BJP and rather decided to wait for what the CAB officials describe as the “opportune moment”. Instead, he offered to promote the PM’s cleanliness drive as an ambassador of the Swachh Bharat campaign.

But everything changed on Saturday night when Mr. Ganguly attended a long meeting at Union Home Minister Amit Shah’s residence in Delhi, attended by BCCI officials, Mr. Shah’s son Jay Shah and the influential Assam politician Himanta Biswa Sarma. The Assam Cricket Association, among others, had backed Mr. Ganguly in a close contest which virtually ended at Mr. Shah’s Krishna Menon Marg residence. CAB sources told The Hindu that it was at this meeting that the two other contenders for the post – former cricketer Brijesh Patel and Delhi Cricket Board president Rajat Sharma – were nudged to make way.

“Sourav Ganguly was given the go-ahead as striker and I think Anurag Thakur [former BCCI president] played a significant role in backing him,” said a CAB official on condition of anonymity.

There was immediate response from a section of TMC leaders. “Mr. Ganguly is articulate, good-looking, a superstar, liked by Mr. Modi and Mr. Shah and has now clearly established that he understands politics… he is a challenger,” said a Minister considered close to Mr. Ganguly.

While Mr. Ganguly himself has brushed off the buzz as “speculation”, the pace at which he fixed the meeting with Mr. Shah and got him to bat for him is “amazing”, say BJP leaders.

Whether Mr. Ganguly will be selected to steer Bengal or campaign for the BJP in the 2021 Assembly poll, the developments of the last 48 hours have put the State BJP in a spot.

Warden held for ‘misbehaving’ with minor

A warden in the Tribal Welfare Ashram High School, Boath, in Adilabad district, Ade Vasanth Rao, was on Monday booked under Sections 354, 354 (d) of the IPC and Section 8 of the Protection of Children from Sexual Offences (POCSO) Act by Boath police for alleged sexual misbehaviour with a minor student. The Class VIII […]

The Cabinet Committee on Security (CCS) headed by Prime Minister Narendra Modi gave exceptional and unprecedented waivers to M/s Dassault Aviation and M/s MBDA in the offset contracts they signed with the Indian government on September 23, 2016 as part of the €7.87 billion Rafale deal. These waivers, granted on August 24, 2016 at the highest level of political decision-making, were […]

The TTD is contemplating introducing airport-type system to minimise the loss arising out of sale of laddus and also to check racketeering. According to statistics, the TTD suffers a loss of over ₹200 crore every year on sale of the world-famous prasadam. The cost of manufacturing of laddus comes to about ₹39 a piece, but […]