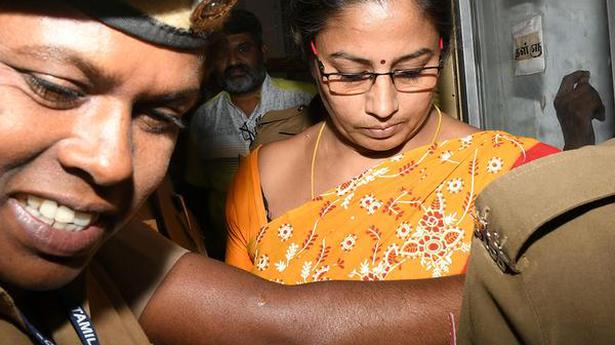 The Madurai Bench of the Madras High Court on Tuesday granted bail to suspended assistant professor Nirmala Devi, nearly 11 months after she was arrested on the charge of attempting to lure college girls in Virudhunagar to provide sexual favours to “high ranking” officials of the Madurai Kamaraj University (MKU).

The incident came to light after an audio clip, in which Ms. Devi could be heard trying to convince a few students of the Devanga Arts College to provide certain favours in return for academic progression and financial gain, was leaked. Ms. Devi had denied the allegations.

Justice M. Dhandapani granted bail to Ms. Devi, stating that as the investigation had been completed and a charge-sheet filed, there were no apprehensions over the possibility of records being tampered with or witnesses being influenced in the case.

Also, the co-accused — two academics of the MKU — were already out on bail.

However, the court restrained Ms. Devi from issuing any public statement regarding the case. Further, it asked her to cooperate with the trial pending before a lower court.

Meanwhile, a Division Bench of Justices N. Kirubakaran and S.S. Sundar heard Ms. Devi in-chamber in connection with a public interest litigation petition filed by P. Suganthi, general secretary, All India Democratic Women’s Association, which sought a direction to transfer the investigation from the CB-CID to the CBI.

It is Siddaramaiah who is ‘nalayak’,says Shobha Karandlaje

The former Chief Minister Siddaramaiah has lost his mental balance. He should be admitted to NIMHANS if the Congress-Janata Dal(S) coalition had to be saved in Karnataka, the former Minister and BJP leader Shobha Karandlaje said in Chikkodi on Sunday. She was responding to reports that Mr. Siddaramaiah had described Prime Minister as unworthy (”nalayak”) […]

The sleuths of Red Sanders Anti-Smuggling Task Force (RSASTF) on Wednesday arrested two residents of Tirupati and seized the precious logs from an autorickshaw. The teams arrested Rapuru Prem Kumar (31) and N.R. Suryanarayana (26) when they were trying to load six red sanders logs to an autorickshaw near Ragimakulakunta. During interrogation, the accused told […]