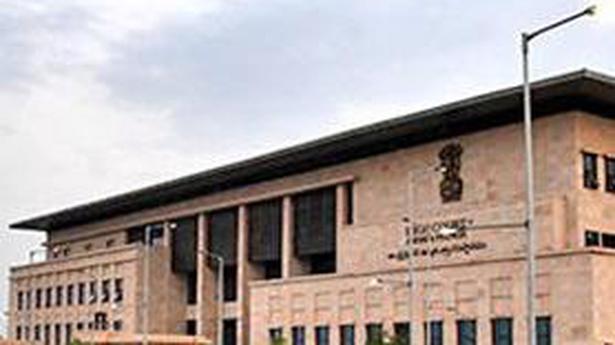 It has seriously violated the doctrine of Separation of Powers, State govt. tells SC

The Andhra Pradesh High Court has “virtually taken over the executive functions of the State”, the Y.S. Jaganmohan Reddy government told the Supreme Court on Thursday.

The State complained that the High Court had now assumed for itself the power to decide even something as “innocuous” as the construction of a guest house. “In doing so, the High Court has completely ignored the warning that the Supreme Court has, time and again, sounded advising the courts to respect the other co-equal organs of the state and to refrain from assuming such powers to itself,” the petition said.

The bone of contention is a November 2 direction of the High Court to the State to submit before it the construction plans for a guest house proposed in Vishakapatnam. The High Court had “seriously violated the doctrine of Separation of Powers”, the State, represented by advocate Mahfooz Ahsan Nazki, contended.

The State’s petition referred to a 2008 judgment of the Supreme Court which said “in the name of judicial activism, judges cannot cross their limits and try to take over functions which belong to another organ of the State”.

The State government pointed to what former Chief Justice of India J.S. Verma had said in the Dr. K.L. Dubey lecture about judiciary intervening in all and sundry, including “a ‘mysterious car’ racing down Tughlaq Road in Delhi, allotment of a particular bungalow to a judge, specific bungalows for the judges, monkeys capering in colonies, stray cattle on the streets…”

The State drew the court’s attention to the U.S. Supreme Court’s lesson in history on how “the independence of the judiciary is jeopardised when courts become embroiled in the passions of the day”.

Cattle in custody die ‘due to various reasons that include illness and lack of infrastructure’ Source: thehindu.com Related