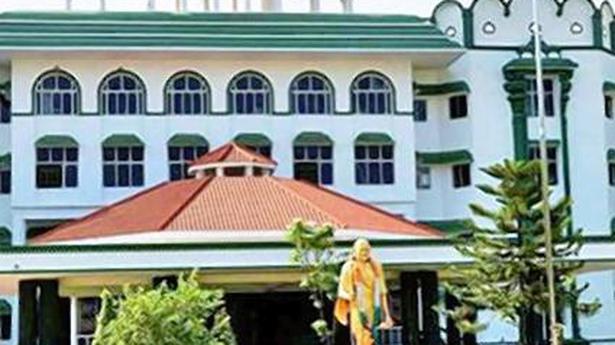 The Madurai Bench of the Madras High Court on Friday directed the Director General of Police to issue a circular to all police officers across the State, to follow the Tamil Nadu Subordinate Police Officers Conduct Rules which states that gifts, rewards and dowry are prohibited.

Justice S.M. Subramaniam directed the DGP to issue the circular within a period of six weeks. The court observed that Tamil Nadu Subordinate Police Officers Conduct Rules, 1964, categorically states that behaving unbecoming of a government servant itself was a misconduct.

The Rule 4 specifically states that gifts, rewards and dowry are prohibited and if at all received, amounts to misconduct. Rule 4(1)(b) states that complementary gift of flowers or fruits or similar articles of trifling values are also prohibited, the court said.

It is visible in the public domain that large number of flowers and bouquets are shared by way of gifts in the Police Department. Thus, the DGP is bound to remind the Conduct Rules to all police officials in order to ensure discipline and decorum in the uniformed services.

The court was hearing the petition filed by S. Thennarasu of Madurai who challenged the deferment order of his promotion to the post of Inspector of Police. The promotion was deferred after a criminal case was registered against the petitioner following a private dispute.

A government servant must have a clean record of service. His behaviour both inside and outside the office and while performing or not performing his duty, must be good. A public servant is expected to maintain good conduct in public. It is not as if a police officer, who is off duty, can involve in some criminal case or commit certain misconduct, the court said.

In the present case, the court said that after the disposal of the criminal case as well as the currency of the punishment, the case of the petitioner shall be considered. If an employee is exonerated from the departmental disciplinary proceedings and in the event of no other impediment, the case of the petitioner should be considered for promotion to the higher post in accordance with the promotion Rules in force, the court said.

The support extended by Rajasthan Chief Minister Ashok Gehlot, who put in a surprise appearance on Friday at the ongoing protests against the Citizenship (Amendment) Act (CAA) here, has given strength to the agitation. The indefinite protest, organised on the lines of Delhi’s Shaheen Bagh, has also been replicated in several towns of the State. […]

The Travancore Devaswom Board has collected revenue worth ₹104 crore from Sabarimala as on Saturday, according to board president N. Vasu. Mr. Vasu said this was in sharp contrast with the ₹64 crore revenue collected during the same period in the previous pilgrim season. He said Aravana sales had fetched a revenue of ₹43.4 crore […]