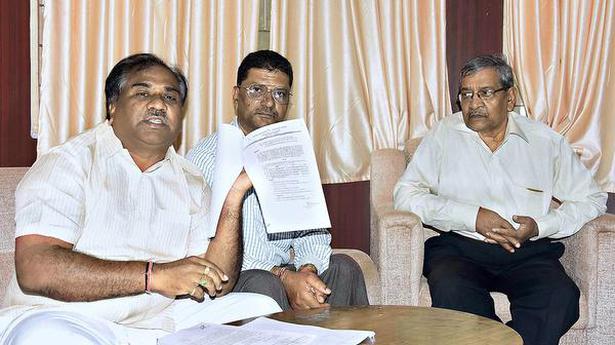 “This year, the municipal authorities have asked us to pay ₹ 13.40 lakh. HDMC’s decision would curtail the event and dampen the spirit of Dasara festivities being organised here since long,” he said.

The Dasara event is being conducted for the last 15 years in association with the District Industries Centre, the Kananda and Culture Department and other local organisations. The HDMC too was renting out the space by charging nominal fee. But, this year, the HDMC is seeking exorbitant fee.

This Dasara event is organised free for the general public and there is no government funding also. The HDMC, instead of promoting such cultural activities, is making all efforts to impose a restriction, he said and added that and an intensified struggle involving people from all walks of life would be organised if the HDMC does not extend support to the event.

Hitting back at the Congress, Finance Minister Arun Jaitley on Thursday said former Prime Minister Jawaharlal Nehru was the “original sinner” who favoured China over India for permanent membership into the United Nation Security Council. This comes within hours of Congress president Rahul Gandhi terming Prime Minister Narendra Modi as “weak” and “scared” of Chinese […]

The Election Commission of India (ECI) on Thursday said Congress president Rahul Gandhi’s interaction with students of a women’s college in Chennai did not violate the model code of conduct (MCC), though it has sought a report on his speech. Tamil Nadu Chief Electoral Officer (CEO) Satyabrata Sahoo said local election officials have reported that […]