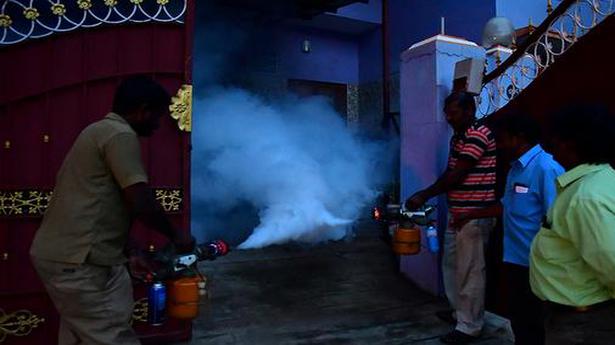 With the floating population on the rise during winter and the festival season, the dengue scare has peaked in Vellore district.

Kiran Kumar of Natrampalli died at a private hospital in Salem in Tuesday. Though health department officials did not confirm the death due to dengue, municipalities, town panchayats and village panchayats have initiated a number of preventive mechanisms to rule out fever incidents in the district.

Besides officials of the Public Health Department, officials of municipalities, town panchayats and rural development offices have been roped in to create awareness on dengue and destroy breeding grounds of mosquitoes.

Vellore recorded 292 cases of dengue so far this month, but health officials have ruled out official apathy, as most patients are receiving treatment and recovering. One cannot get rid of the fever and its after-effects fast, and it may take at least seven to 10 days to completely recover, said an official from the Health Department.

The anti-dengue drive has been intensified in the Vellore City Municipal Corporation (VCMC) limits. A special scheme has been put in place in all five zones, for undertaking the measures.

The period was considered conducive for mosquito breeding.

“Hence, officials from various departments, including public health, rural development, revenue and municipal and town panchayats have been asked to carry out an intensive anti-dengue drive in their respective areas,” said T. Manivannan, health officer, VCMC.

Apart from this, two workers in each ward engage in fogging, on a daily basis, to reduce mosquito breeding, he said.

Surveillance has been stepped up for extending treatment to patients with fever and related ailments, and a tab is maintained on those staying in the city as patients’ caretakers. Hospitals, including private ones and clinics have been asked to report any case of fever-related ailments. Health officials then visit them and check their casesheets. Based on it, fever clusters have been identified.

Medical camps are being arranged in rural areas, and suspected cases are being sent to government hospitals for treatment. The affected area comes under the blanket cover of the Health Department, that has taken adequate measures to prevent the spread of the disease.

District Collector A. Shanmuga Sundaram has released a list of dos and don’ts for patients, attendants and health officials during this critical juncture.

Stressing the need for cooperation of people in dengue prevention measures, he advised residents that it was important for them to remove or destroy sources of mosquito breeding. He released a dengue casesheet, providing information on the disease, its treatment, lab results, etc. He directed that the points be discussed with attendants periodically by doctors at government hospitals. He also cautioned the residents not to fall prey to quacks and directed them to rush the affected immediately to the Government Hospital in Adaukkamparai, Vellore.

Bodies of 3 killed in BJP-TMC clash recovered near Kolkata

Three bodies have been recovered from two places in Sandeshkhali block in North 24 Paraganas district, about 80 km south of Kolkata following Saturday night’s violence between Bharatiya Janata Party (BJP) and Trinamool Congress (TMC) workers. The police administration is yet to make any official statement. The two BJP workers who were killed have been […]

A few revenue officials in Ranni, including a tahsildar and a village officer, are facing disciplinary action for abetting forest plunder from the Vattakappara hill in Chethackal village in Ranni taluk. In an inquiry report submitted to District Collector P.B. Noohu on December 17, 2019, Thiruvalla Subcollector Vinay Goel recommended disciplinary action against the officials […]

Narmada Bachao Andolan (NBA) founder Medha Patkar has started an indefinite protest over her demand for proper rehabilitation of the flood-affected people in Madhya Pradesh’s Barwani district and opening of gates of the Sardar Sarovar Dam in neighbouring Gujarat. Earlier this month, the dam’s backwater level increased following heavy rains, creating a flood-like situation in […]