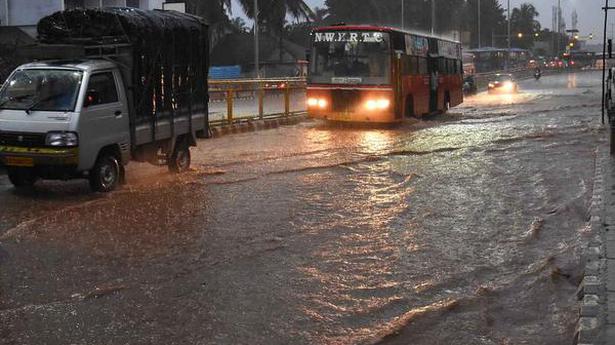 Life was affected due to heavy rain in the districts of Dharwad, Haveri and Gadag on Sunday.

Loss of property and infrastructure due to heavy rain has been reported from Gadag and Haveri districts, which were drenched by heavy downpour since Friday evening.

It started raining in Hubbali and Dharwad since evening on Sunday and life came to a standstill within a few minutes. As rain became heavy, storm water entered several residential and commercial buildings in Dharwad. Several areas, including Lakshmisingan Keri, Jannat Nagar, Narayanpur, Sadhankeri and Bavikatti Plot, were inundated, leaving residents troubled.

People found it extremely tough to drain rainwater out of their houses as power supply too was disrupted. All the major roads, including the old P.B. Road, remained waterlogged throwing traffic out of gear. As it was Sunday, many business establishments remained closed since noon. However, the owners were forced to open their shops to flush out rainwater.

Heavy rain was reported in rural areas since the early hours of Sunday. While the Turprihalla is in spate, the Hoolikeri Lake located close to Alnavar town is overflowing. Connectivity with Belagavi too was lost as rainwaters flooded the State Highway near Harobelavadi village. So far, no loss of life has been reported.

In Hubballi, traffic was affected due to waterlogging.

Heavy rain lashed Gadag-Betageri and storm water entered houses in Gangimath Layout, Lakshmi Chawl and the areas near the old Bus Stand. Heavy rain also damaged roads in several areas. The stretch between Deputy Commissioner’s office Circle to the New Bus Stand has been heavily damaged. Heavy rain has also been reported from the rural areas of the district where farm pits are brimming, streams are overflowing and roads were damaged in several areas. Onion and sunflower growers are worried as rain is likely to damage standing crops.

Low-lying areas in Haveri city, including Shivaji Nagar, Rajendra Nagar, Ashwini Nagar and Nagendranamatti, were inundated. Traffic movement on National Highway 48 near Haveri was affected for several minutes as storm water flooded the road. Several rural roads too have been damaged.

No ‘lockdown’ for oustees of Kondapochamma

In what could be termed as a surprise move, some of the oustees from both Mamidayala and Bahilampur villages are being vacated by the authorities. This despite the lockdown announced by Chief Minister K. Chandrasekhar Rao. Both these villages are getting submerged under Kondapochamma reservoir. Oustees of Thanedarpally tanda and Thanedarpally were already shifted to […]

The family of one of the three men killed during mob violence in Arunachal Pradesh capital Itanagar last month has declined the compensation offered by the State government and demanded punishment of the “killers” according to tribal customary law. A 48-hour shutdown against the government’s move to grant permanent resident certificates to six non-tribal groups […]