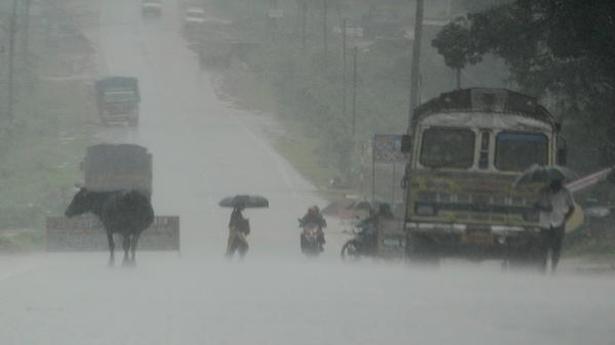 With the Meteorological Centre here forecasting more downpour till Friday, the State government has asked the district administrations to remain prepared to tackle a flood-like situation, officials said.

Heavy rain since Tuesday, triggered by a cyclonic circulation over the Bay of Bengal off the Andhra Pradesh coast, caused inundation of low-lying areas in State capital Bhubaneswar and Cuttack, Puri and Balasore districts, officials said.

Schools in Gajapati, Ganjam and Puri districts have been shut because of the heavy rain.

State Revenue and Disaster Management Minister Sudam Marndi said the government is prepared to deal with water-logging or a flood-like situation that may arise.

The district collectors have been instructed to take appropriate measures and keep the administrative machinery prepared to deal with any exigency.

All the district Emergency Operations Centers (EOC) have been asked to operate round-the-clock and monitor the situation, the Revenue and Disaster Management Department said in an advisory to the district collectors.

Apart from the forecast of heavy downpour till Friday, most parts of the State may receive light to moderate rain till Sunday.

‘Yellow warning’ was issued for Jajpur, Kendrapara, Jagatsinghpur, Nayagarh, Keonjhar, Kandhamal, Boudh and Dhenkanal districts where heavy rain may lash some areas till Wednesday, it said.

The MeT Centre has forecast heavy rainfall in Mayurbhanj, Sundargarh, Keonjhar, Jharsuguda, Sambalpur, Baragarh and Gajapati districts on Wednesday and Thursday and issued “yellow warning” for the areas on the two days. Some areas of Sundargarh, Keonjhar, Mayurbhanj and Balasore districts are likely to receive heavy rain on Thursday and Friday while the intensity of the downpour may subside thereafter, it added.

‘Demand for enhancing relief amount will be considered’

Prakash, Joint Secretary, Ministry of Home Affairs, who is heading the flood assessment team of the Union government, has said that the farmers demand to enhance the quantum of compensation would be considered. Speaking to presspersons during a visit to the flood-affected areas in the district on Monday, Mr. Prakash said that several farmers, including […]

Weeks after Union Minister Maneka Gandhi courted controversy by saying she might not be inclined to work for Muslims who do not vote for her, a Bharatiya Janata Party MLA in Assam has suggested that the government should not take care of Muslims for a similar reason. Prasanta Phukan, who represents the Dibrugarh Assembly constituency, […]

Ramesh Bais, a seven-time MP from Chhattisgarh’s Raipur and former Union minister, was on Monday sworn in as the Governor of Tripura, an official said. The Chief Justice of Tripura High Court, Justice Sanjay Karol, administered oath of office to Mr. Bais in the presence of Chief Minister Biplab Kumar Deb and senior officials of […]