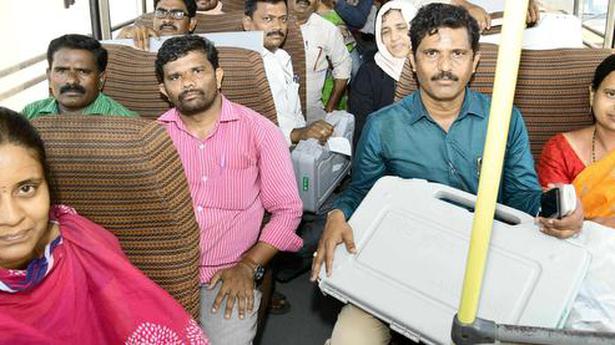 The police have sounded high alert in the erstwhile naxalite stronghold of Manthani and Peddapalli Assembly segments for the elections to Peddapalli parliamentary constituency after the Maoists killed a BJP legislator and four security personnel by triggering a landmine in Dantewada region of neighbouring Chhattisgarh on Tuesday.

Incidentally, there was no naxalite movement in the region for the past several years. However, the fresh incident of triggering a landmine in the adjoining State abutting the forests of Mahadevpur mandal in Manthani Assembly segment has become a cause for concern for the police personnel for the peaceful conduct of elections in the forest dominated Manthani and some parts of Peddapalli Assembly segment. As usual, naxalites have called for poll boycott. In the wake of the development, police intensified combing operations in the region for the area domination in the forest abutting the Godavari. They are also keeping a close surveillance along the shores of the river to avoid intrusion of Maoists into Telangana by deploying drone cameras. Taking the past experience into consideration — of the landmine blasts by the naxalites at Lenkalagadda in Mahadevpur mandal, and Dobbalapadu in Mahamutharam mandal — during the election time and killing security personnel, this time the policemen are leaving no stone unturned to ensure peaceful conduct of poll. Already, the police road-opening parties (ROP) with the bomb disposal (BD) teams have thoroughly checked all the roads and culverts and also the bushes for possible claymore mines targeting the police and other VIPs. The police have decided to avoid usage of vehicles and motorcycles on kuchha roads in the villages and instructed the police teams to trekking cross country to avoid possible ambush.

Polling till 4 p.m. only

In view of naxalite presence in the adjoining State and location of the polling stations in the interior villages, the Election Commission has decided to conduct election in Manthani Assembly segment from 7 a.m. to 4 p.m. instead of the normal timing of 5 p.m. The early completion of polling was taken to ensure that the EVMs reach safely to the district headquarters for storage at strongroom amid tight security.

“There is no naxalite presence in the region. However, we are not leaving anything to chance and intensified our combing and area domination operations to avoid intrusion of naxalites from the adjoining State. Besides, we have kept a close surveillance on Maoists sympathisers,” said a senior police officer.

Two arrested on charge of spreading fake news about Kumaraswamy

The High Grounds police have arrested two men for allegedly spreading fake news about Chief Minister H.D. Kumaraswamy. The arrested have been identified as Ajith Shetty Heranje, a correspondent with media portal uksuddi.in, from Udupi, and Gangadhar, hailing from Bagalkot. Dinesh H.B., media secretary to the Chief Minister, had lodged a complaint on Thursday over […]

Watch | Wall built in Ahmedabad ahead of Trump’s visit

Ahead of US President Donald Trump’s visit to Ahmedabad, the government has built a new wall at a few patches to hide slums dotting the road that his convoy would use. The Ahmedabad Municipal Commissioner has denied this claim, saying it was built to prevent encroachments. Trees have been trimmed, fully grown palm trees have […]