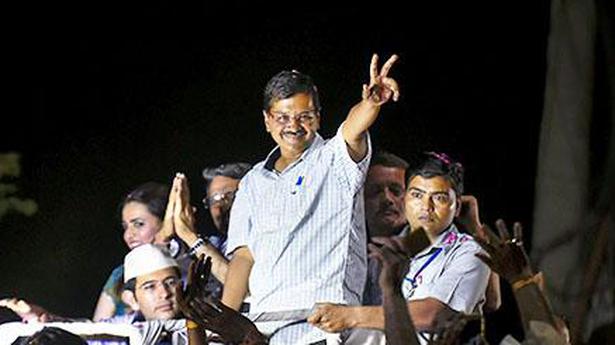 The back and forth between the Aam Aadmi Party and the Congress on whether or not to form an alliance ahead of the Lok Sabha election delayed the start of campaigning in the Capital, but since April 26, the last day for withdrawal of nomination, the city has witnessed high-voltage political canvassing.

The BJP and Congress organised big rallies and roadshows with senior leaders such as Narendra Modi, Amit Shah, Rahul Gandhi and Priyanka Gandhi Vadra trying to sway voters with their words and presence.

AAP, on the other hand, said its internal surveys had shown that big rallies did not have much of an impact and therefore, it did not organise any major public rallies.

The BJP with the help of star campaigners projected Mr. Modi as the only option for the post of Prime Minister and its campaign focused on “nationalism” and schemes like Ayushman Bharat that the Centre had introduced.

The Congress focused its campaign on the benefits of NYAY (minimum income guarantee scheme), which it had promised to implement if elected to power. It attacked the BJP over its economic policies like demonetisation and GST that it claimed had broken the back of small businessmen in the city. The party targeted both AAP and BJP for not doing enough to prevent the sealing drive in the city.

AAP built its campaign around full statehood for Delhi. It was the first to launch its campaign in the city and announced the names of six candidates on March 2 and the last one on March 17. The BJP and Congress announced their candidates only a day before the last date of nomination to cover for the possibility of a Congress-AAP alliance, which didn’t materialise.

AAP divided its campaign into three phases. The first phase from March 10 to 17 included jan sabhas in which Chief Minister Arvind Kejriwal launched the party’s statehood campaign. In the second phase, between April 10 and 25, the party conducted door-to-door campaigns at the block level with an aim of reaching out to 35 lakh voters. In the last two weeks, the party organised about a dozen roadshows in all seven constituencies.

A roadshow on May 4 during which a man from the crowd climbed onto the vehicle of Mr. Kejriwal and slapped him created a major controversy, after which the security cordon around the CM was tightened.

The State has a low testing rate relative to India’s avg despite cases doubling quickly in the last week Source: thehindu.com Related

Data | COVID-19 has affected higher share of men in India, difference relatively lesser in other countries

Among the States which have reported gender data, the difference between the number of male and female patients is the highest in Jharkhand Source: thehindu.com Related