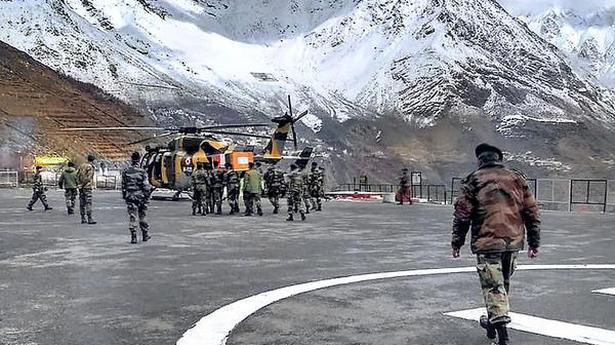 The search and rescue operation for soldiers trapped by an avalanche in Himachal Pradesh’s Kinnaur district was called off after the bodies of the last two missing soldiers were recovered on Thursday, a defence spokesperson said.

Naik Videsh Chand, Rifleman Arjun Kumar and four other jawans of 7 Jammu and Kashmir Rifles were buried under the avalanche at Shipki La near the India-China border on February 20.

Chand and Kumar’s bodies were recovered on Thursday morning, 23 days after the incident.

The bodies were taken to Pooh from where they will be sent to their families.

The body of Chand, from Thrauna village in Nirmand tehsil of Kullu district, will be moved to Jhakri in the evening, the officer said, adding that his last rites would be performed on Friday morning.

The body of Kumar, from Kattal Brahamana village, Hira Nagar, in Jammu and Kashmir’s Kathua district, will be airlifted by an advanced light helicopter to Janglot on Friday and would be sent by road to his village, he said.

Earlier, the bodies of four jawans were recovered on separate days.

Havaldar Rakesh Kumar’s body was recovered on the day of the avalanche [February 20] , while the bodies of Riflemen Rajesh Rishi and Govind Bahadur Chhetri and Nitin Rana were recovered on March 2, 4 and 9 respectively. The tragedy occurred when the patrol team was moving between two posts.

About 400 Army personnel and several residents of Khab village carried out the search and rescue operation despite adverse weather conditions, the official said.

Sports is as important as education: Adimulapu Suresh

The SRR college in the city was buzzing with activity on Tuesday as the players gathered to display their stellar performances at the South Zone Inter-University Men’s Volleyball Tournament, organised by Krishna University, Machilipatnam. The sound of the volleyball being launched in the air at the command of the referee and the boisterous anthems of […]

The duo were lodged in the same room in the quarantine facility for nearly five days. Source: thehindu.com Related