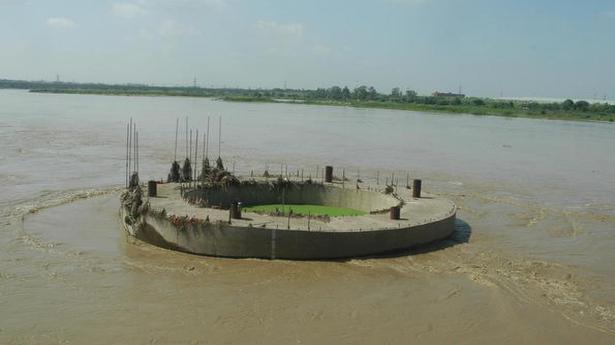 The Himachal Pradesh Cabinet has approved signing of a Memorandum of Understanding (MoU) to sell Yamuna water from the State’s share at Tajewala corridor, an official spokesperson said.

The State government would earn ₹21 crore per annum from the sale of water.

In a meeting chaired by Chief Minister Jai Ram Thakur on Monday, the State cabinet gave its consent to signing of the MoU to sell the Yamuna water from the State’s share at Tajewala corridor, the spokesperson said.

He, however, did not provide details of whom the water would be sold to and with whom this MoU would be signed.

The Cabinet also decided to fill up 3,636 posts of teachers of Junior Basic Training (JBT), Classical and Vernacular (C&V) and Trained Graduate Teacher (TGT) categories in the elementary education department, the spokesperson said.

These posts will be filled up on contract basis as per the Recruitment and Promotion Rules. These include 684 posts of TGT Arts, 359 of TGT Non-Medical, 261 of TGT Medical, 1,049 of Shastri, 590 of language teachers and 693 posts of JBT, he added.

The cabinet also gave its nod to signing of a draft MoU between the State government and the Airports Authority of India (AAI) for development of Nagchala greenfield airport near Mandi, according to the spokesperson.

Director, tourism, has been authorised to sign the MoU, agreements, etc for this purpose with the AAI.

The Cabinet approved a letter of intent for three years in favour of M/S Dalmia Cement (Bharat) Limited for extraction of limestone and shale minerals for setting up a cement plant in Shimla, the spokesperson said.

WARANGAL URBAN DT. The first suspected Coronavirus case was referred to Gandhi Hospital, Hyderabad, by the authorities of the Mahatma Gandhi Memorial Hospital (MGMH) here on Thursday. MGMH Superintendent Dr. B Srinivas Rao said they had referred a patient – who came to MGMH on Thursday with symptoms of Coronavirus – to Gandhi hospital, Hyderabad, […]

The team members will pay regular visits to these hospitals and send reports to the department, the state government said in an order. Source: thehindu.com Related